When Triumph debuted the first Rocket III, the engine looked more like something from the automotive world than anything we had seen in a production motorcycle. The huge power of the 2,300cc engine had the weight to go with it, nearly pulling your arms out of their sockets at launch, but presenting challenges on anything other than flat, straight roads. Now after more than 15 years, the Rocket has matured. With a new, even bigger engine and huge weight reductions, the 2020 Rocket 3 R and 3 GT are faster, more nimble, and more well-rounded machines altogether, but will Triumph’s new triples have what it takes to find success as both a roadster and a cruiser? 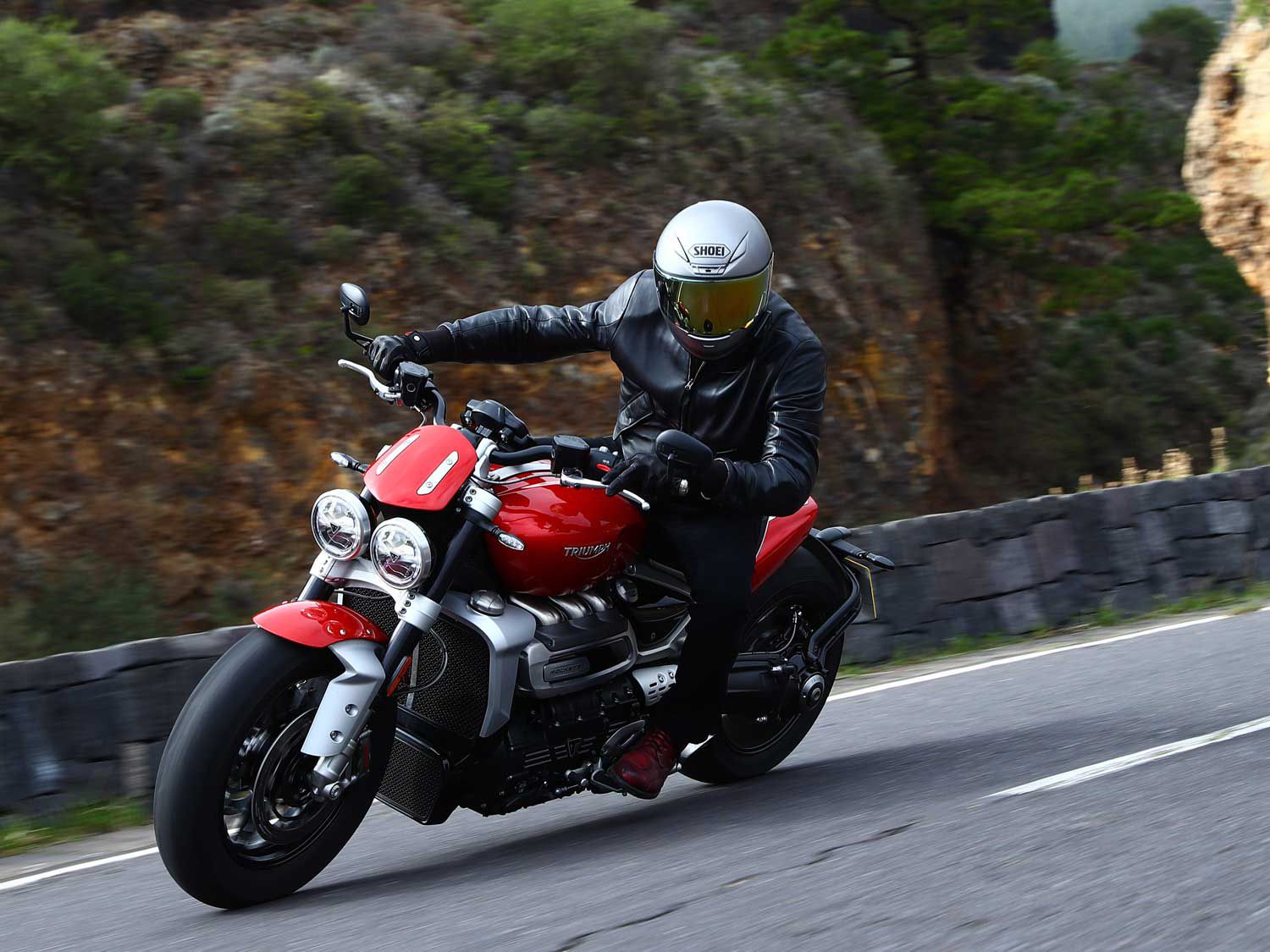 The Triumph Rocket 3 is every bit a rocket. It can blast off from a stop and reach incredible speeds, but until now, sudden changes in trajectory were another challenge altogether. For 2020, Triumph made a point by inviting us to test it on the volcanic island of Tenerife, Spain, which is known for amazing roads that twist and turn around a large dormant volcano in its center. If this bike couldn’t handle the turns, there’s no way it would survive a test on Tenerife. But the team at Triumph promised the new Rockets would be easy to ride, and we were about to find out how right they were. 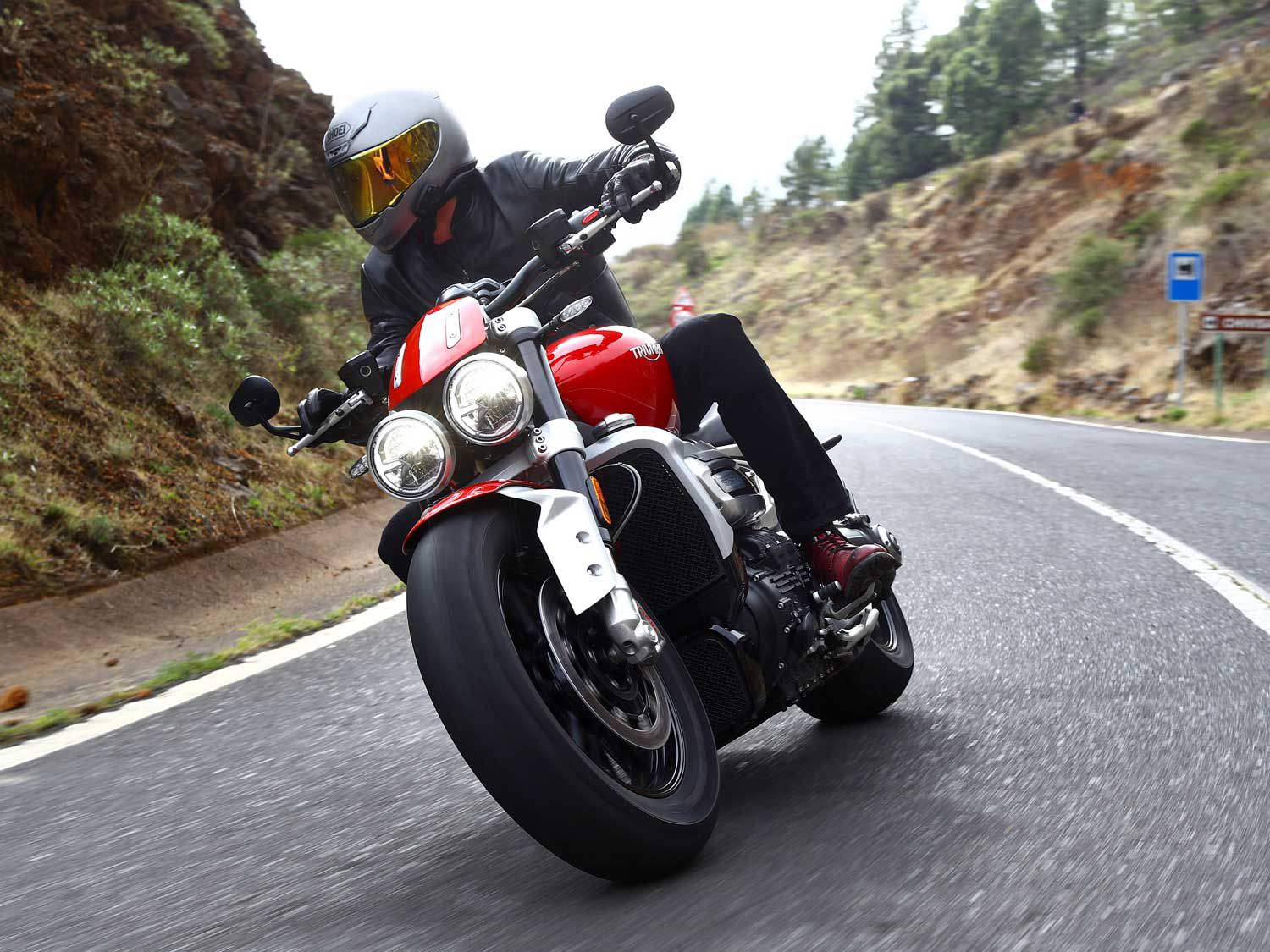 The bikes rumbled to life with a calm, low growl as our group mounted up and prepared for our test ride. Knowing our location and abundance of tight twisties, most riders had their eyes set on the Rocket 3 R, the roadster model with more aggressive styling and ergonomics, but I was happy to take the touring-focused GT, with forward foot controls and a pullback handlebar.

Having just sat through a tech presentation and heard the terms “world’s largest production motorcycle engine” and “highest production torque” more than once, I was expecting a wheel-spinning, adrenaline-inducing launch as I let slip the clutch lever. But to my surprise, the Rocket 3 took off smoothly and at a reasonable pace. It was, in fact, easy to control. 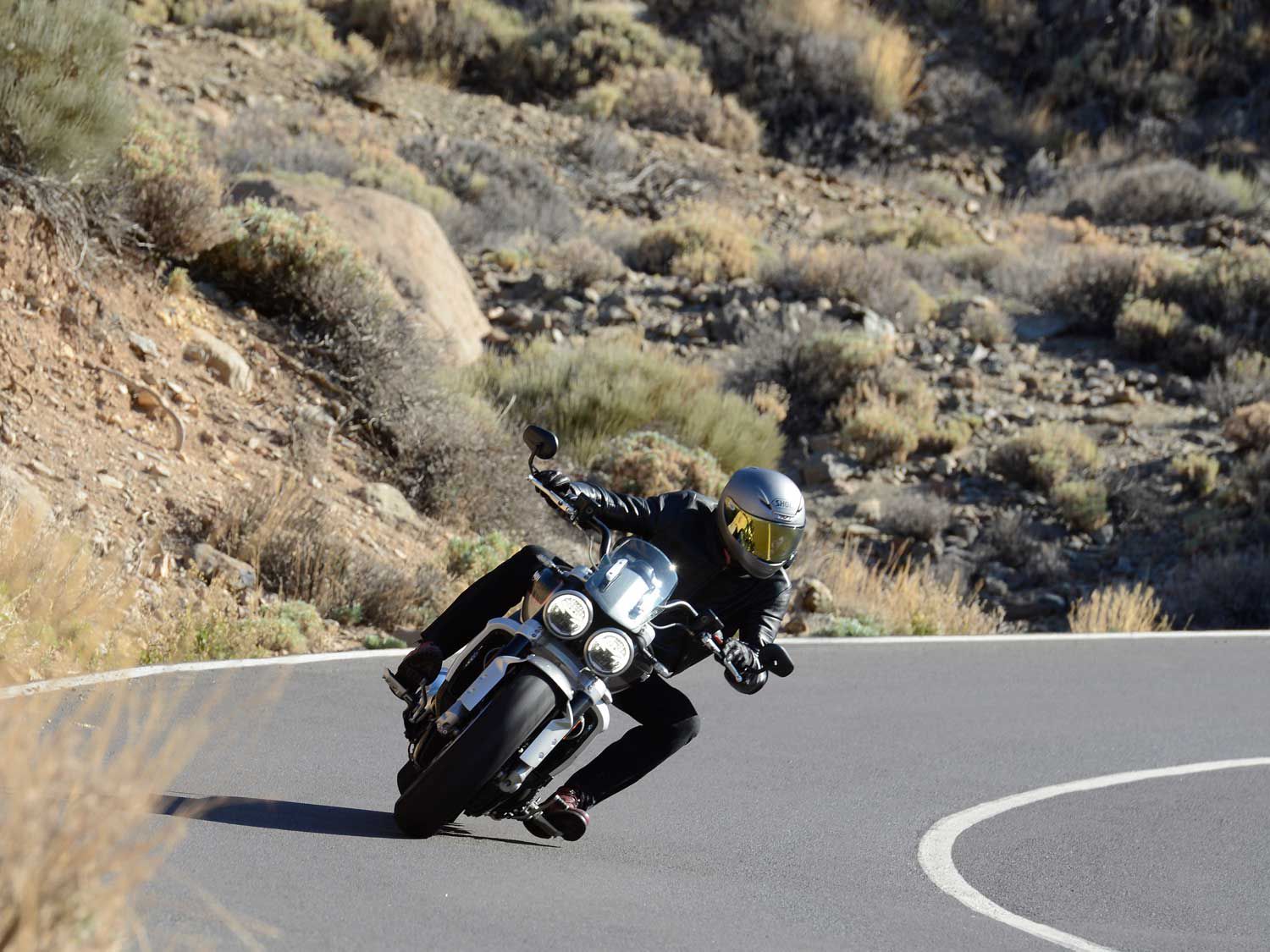 Forward controls and pulled-back handlebars on the Rocket 3 GT were relaxed and comfortable through straight highways and weaving canyons. (Triumph Motorcycles/)

As we turned onto the highway, that power I sought showed itself in spades. A tidal wave of torque, to the tune of 163 pound-feet (claimed) greets the rider from 2,000 rpm to 5,000. And backed with 165 hp, the Rocket’s engine keeps pulling all the way to 6,000 rpm before plateauing at its 500-rpm-higher redline (7,000 rpm). The deep purr of the engine grew with the revs, winding up to a throaty growl but never a roar. I wanted an exhaust note to match the size and power of the engine. Muted by the muffler, the Rocket never really opened up and pulled at my heartstrings like I hoped it would—an aftermarket pipe would go a long way here.

Climbing in elevation as we moved further from the coast, we swept through the island’s volcanic landscape, gaining more confidence in the bike as we headed into the turns faster, braking later and carrying more speed. Throttle response was intoxicating. The more I explored the rev range, the more impressive I found the engine. But as speeds increased, the bike’s substantial size became more apparent. 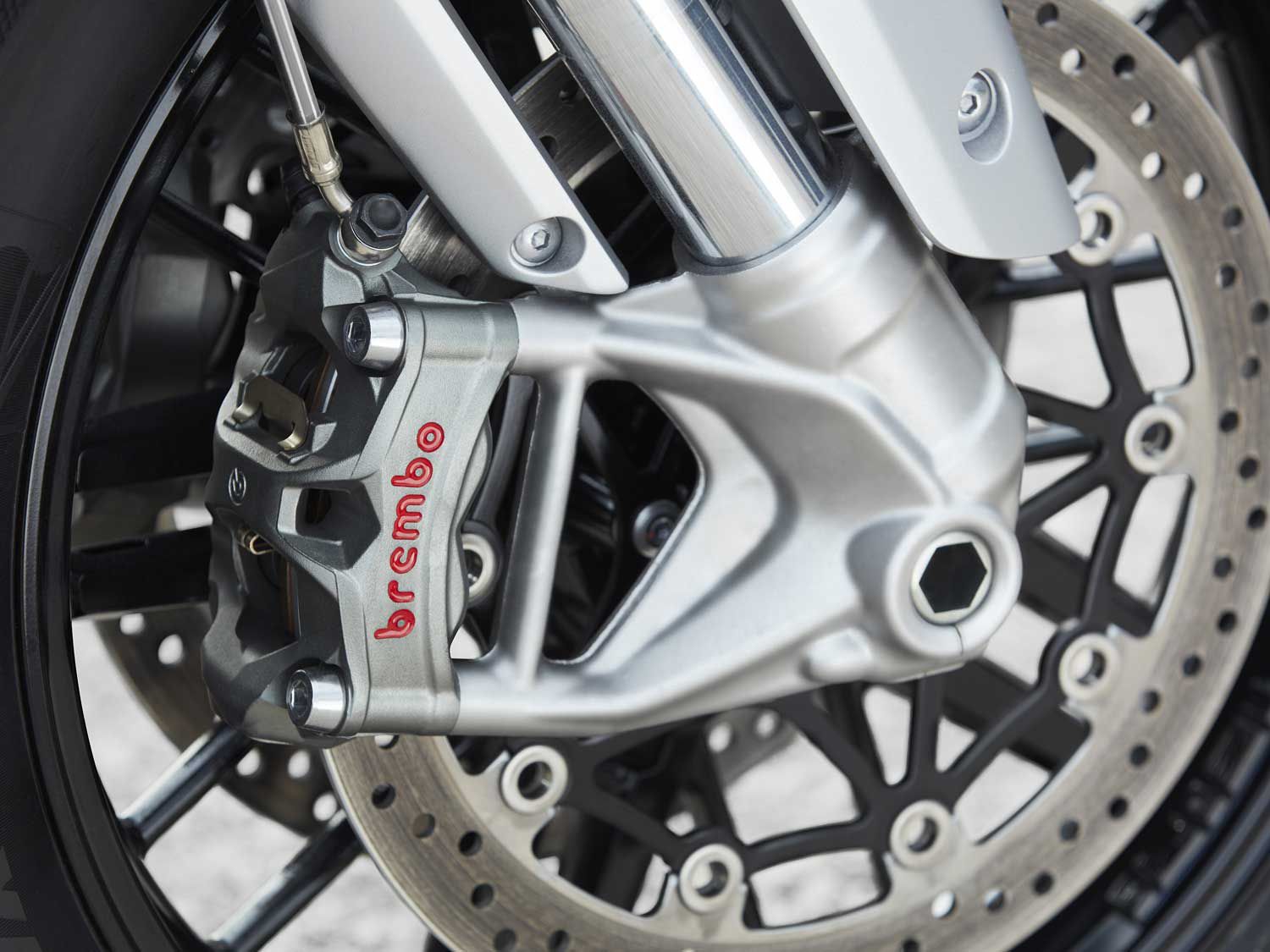 Approaching a turn on the Rocket 3 R, I gave the front brakes a gentle squeeze and pitched the front end in. The bike dropped into the turn swiftly, holding steady as I throttled through, but took a little bit of effort in my body language, along with throttle application, to right the bike as I pulled it out of the turn. The Rocket is heavy and was moving fast, but the brakes can be applied hard with confidence thanks to the tangible feedback provided by the Brembo master cylinder and Stylema brake calipers—developed for superbike competition. 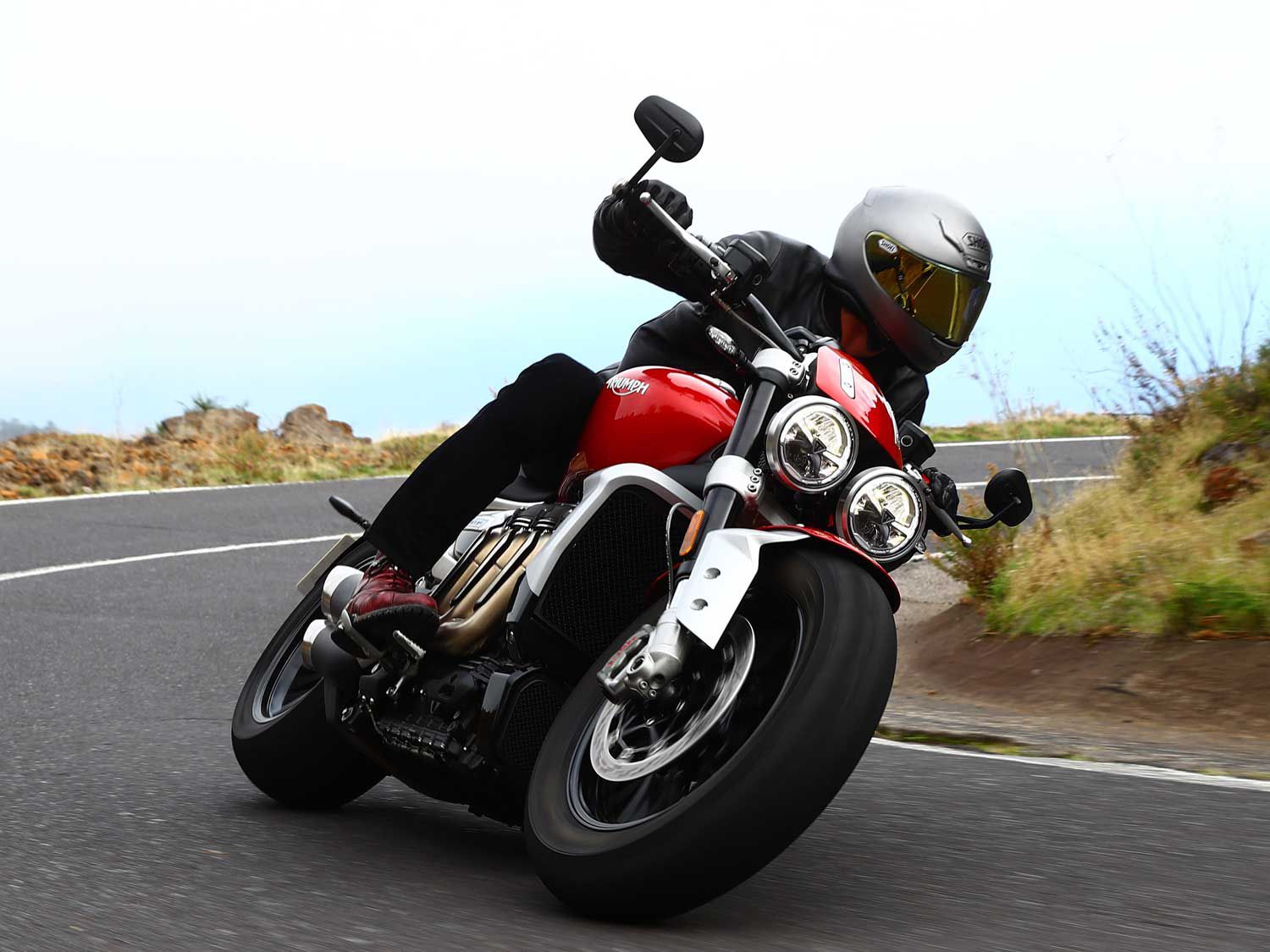 The Rocket’s beefy tires and adjustable Showa suspension grip the road well through tight turns on the island of Tenerife. (Triumph Motorcycles/)

The adjustable Showa fork handles the bike’s claimed 641 pounds of dry weight with ease, mitigating excessive dive during braking and rebounding softly as I let up and hit the gas again to exit the turn. Carrying that much momentum into turns was unnerving at first, but the more we explored the suspension and brake combination, the faster and more comfortable we were. The Avon Cobra Chrome tires developed just for this bike provided excellent grip throughout our testing as well. It took a little getting used to, but the brakes, tires, and ABS technology work well getting that big bike to stop when you want it to. 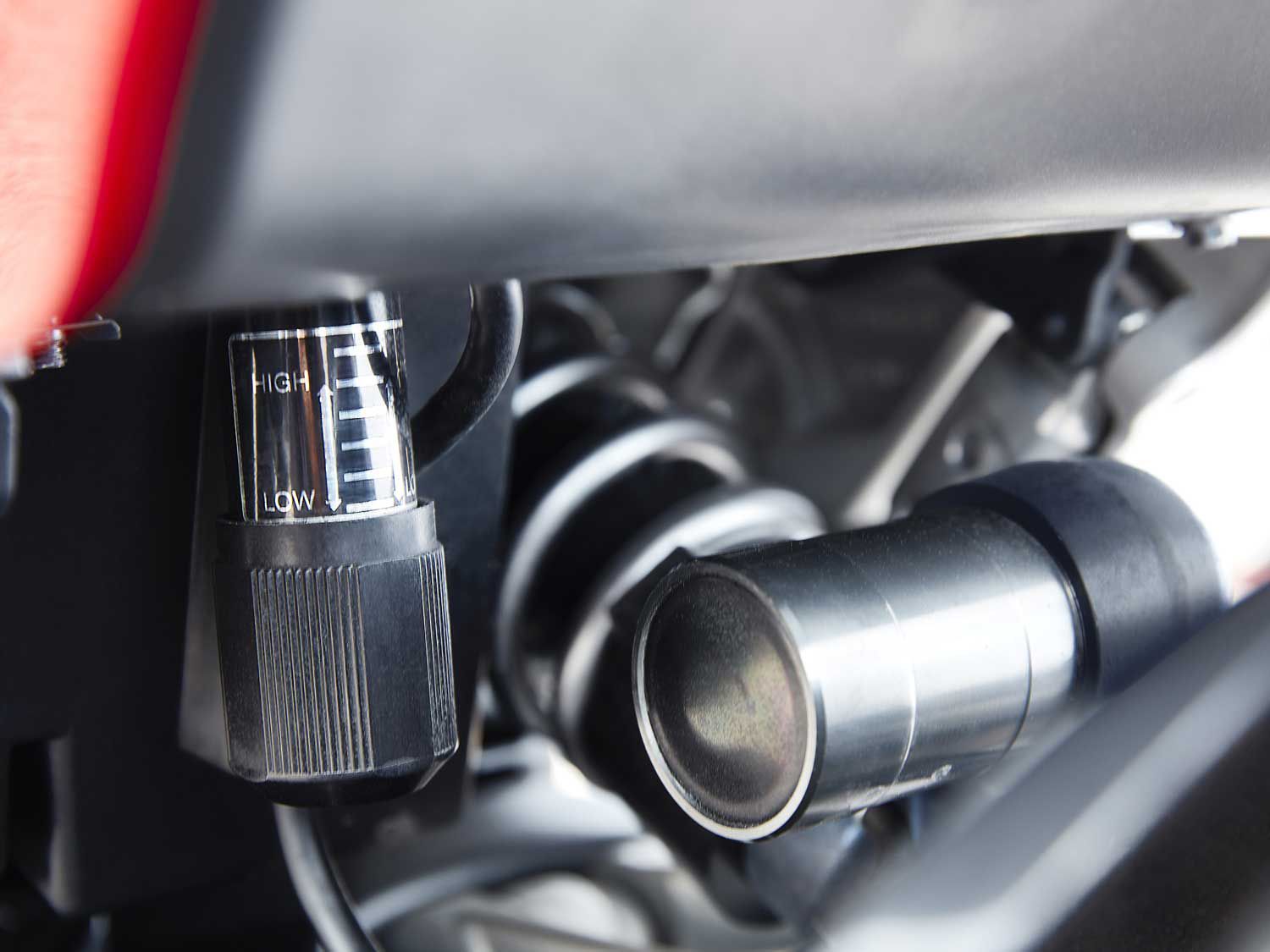 Preload is hand-adjustable, but rebound and compression can also be dialed in on the Rocket’s Showa rear monoshock. (Triumph Motorcycles/)

Weight was cut from just about everywhere possible on the Rockets. An all-new aluminum frame is more than 50-percent lighter—and now integrates a forward-facing air intake into the design. The engine remains a load-bearing component. More than 25 pounds were cut from the engine’s crankcase assembly. Upwards of 8 pounds were saved with a new dry sump oil system and integrated oil tank, and another 8 were shaved thanks to new balancer shafts. This results in an 88-pound weight loss for a claimed dry weight of 641 pounds.

Triumph claims its Rocket 3 R has a 25-percent higher torque-to-weight ratio than its closest competition, the Ducati Diavel. But despite its hefty weight reduction, the bike still feels heavy and slow to react to handling input—for a roadster, anyway. But then again, what roadster has a 2-liter-plus-sized engine? 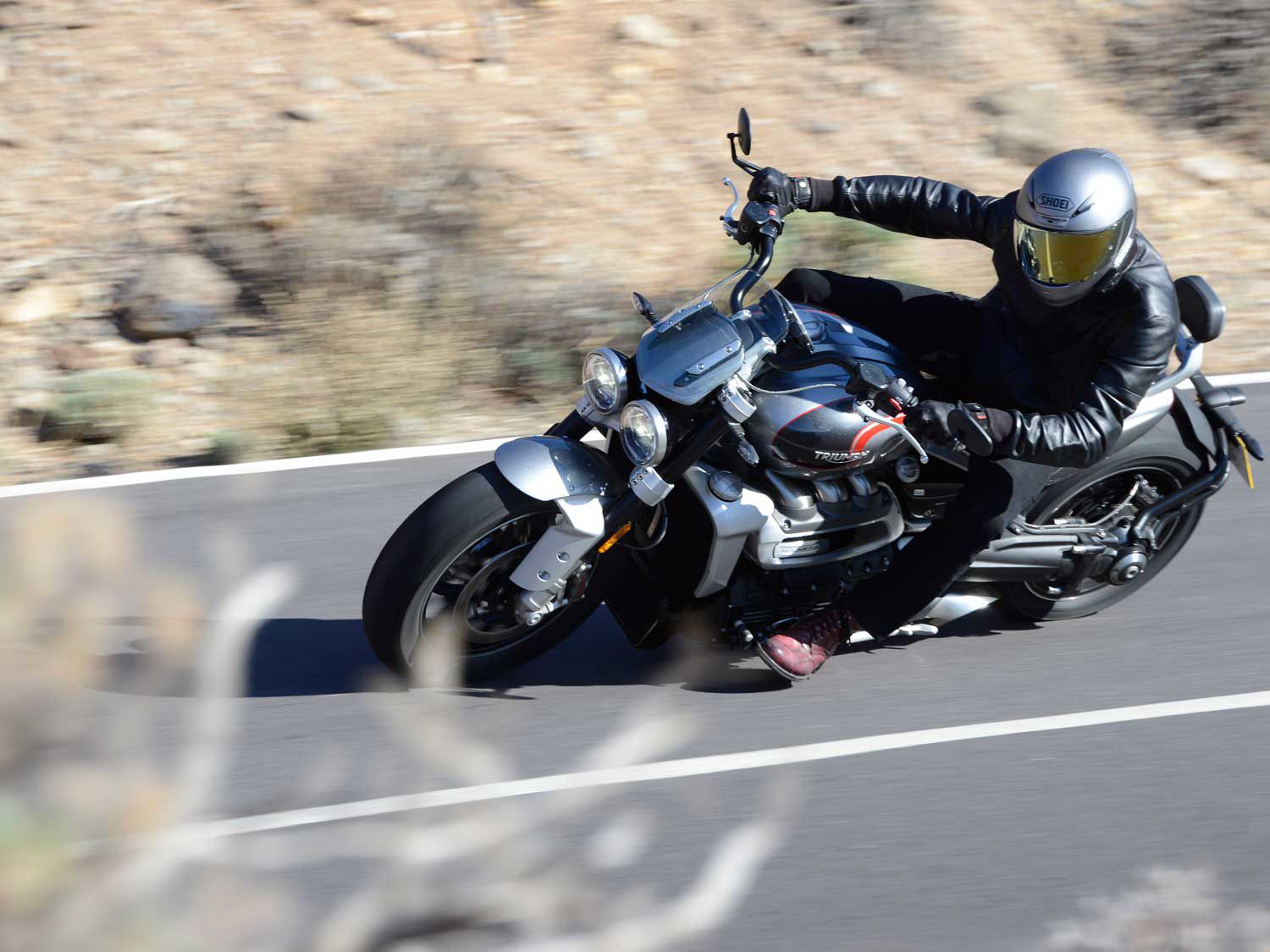 Both Rocket models are able to lean deep and use the whole tire, even if the footpegs do scrape a little. (Triumph Motorcycles/)

We continued to climb past the dry, volcanic desert landscape until we reached a height where the clouds had soaked the roads with moisture, the perfect time to try the new ABS and traction control systems. Both rider aids are supported by a Continental six-axis inertial measurement unit, so whether the bike is leaning or straight, you can expect intelligent response to ensure grip during both acceleration and braking.

Four selectable riding modes are tied to TC level and engine/throttle mapping—Road, Rain, Sport, and Rider configurable mode, which allows for customization. Rain mode is mild but held well on the wet road, and we were able to ride with confidence while maintaining traction through the soggy turns. Sport mode was reserved for the dry tarmac, but felt more like a demonstration of the bike’s monstrous power output than a practical riding mode—a lurchy throttle spurring me on to bring the engine into the higher rev range. 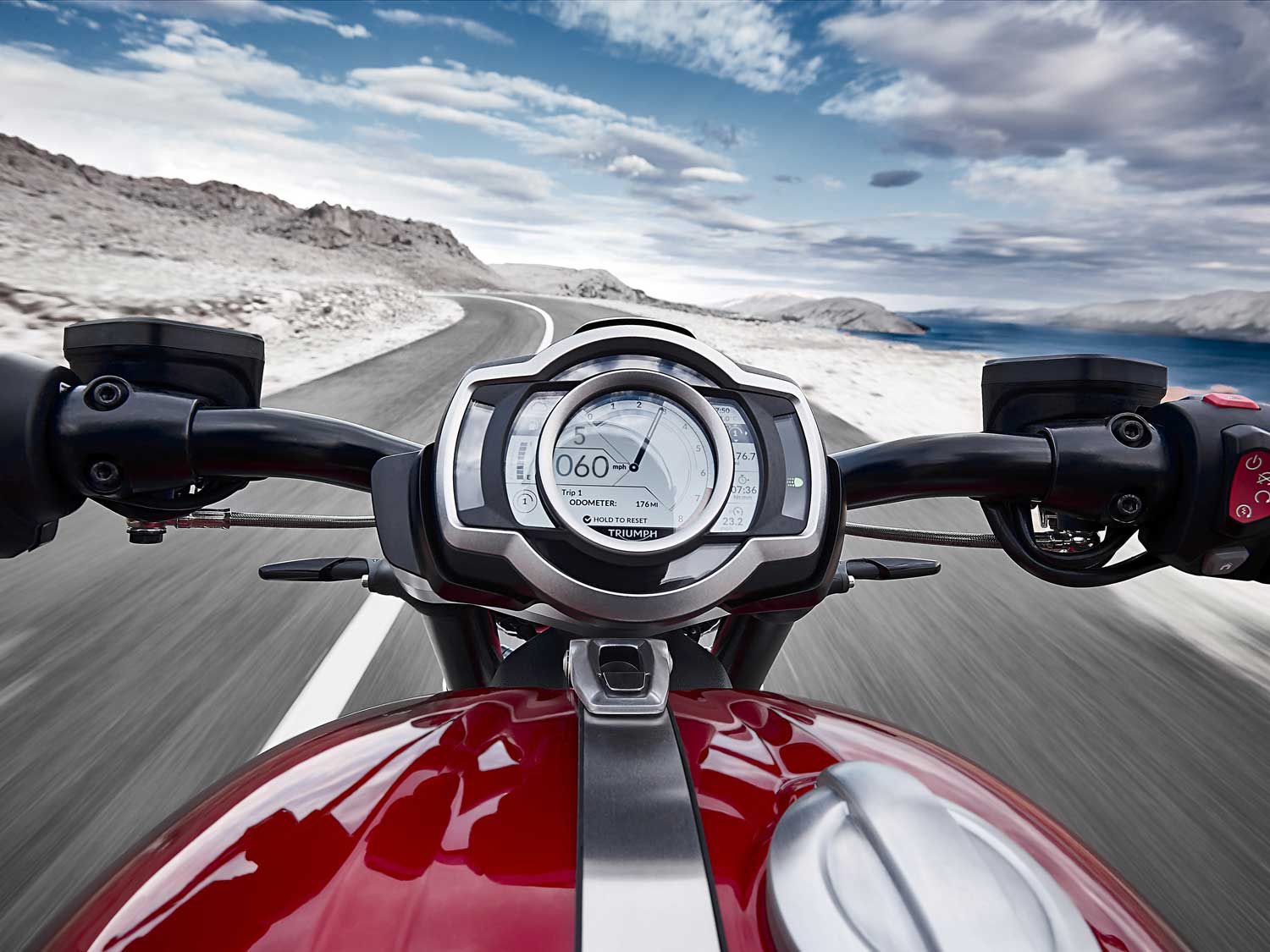 Triumph’s all-new TFT display is customizable, and a Bluetooth connectivity package is now available as an optional accessory. (Triumph Motorcycles/)

As expected, Road mode was the most manageable, predictable, and fun, so it’s where we spent most of the day. Ride modes, display options, and cruise control are controlled through a full-color TFT display, which is easy to work via the handlebar-mounted switch gear. It also feels top-shelf. 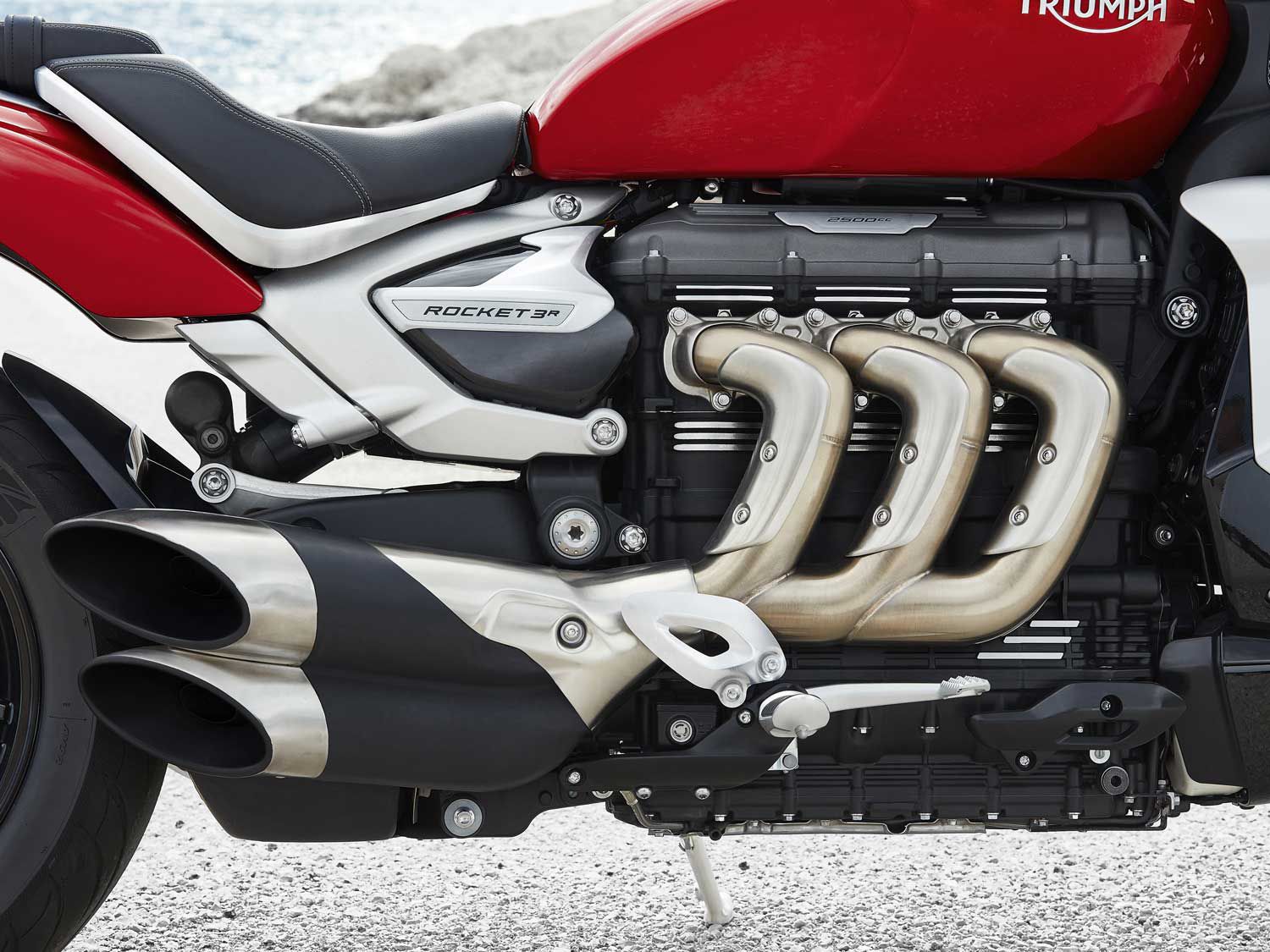 The hydroformed headers on the Rocket 3 are made of six different pieces and are one of the key design elements of the bike. (Triumph Motorcycles/) The iconic dual-headlight design from previous years is carried over to both current Rocket models. (Triumph Motorcycles/)

Being the most expensive motorcycles in Triumph’s lineup, it was important for the Rockets’ look and feel to be as premium as its ride quality. The engine is the dominating centerpiece. Hydroformed exhaust headers wrap around the side, looking sleek but strong and muscular. Iconic to the Rocket 3, the dual headlight design is carried over from previous years, now LED with a unique daytime running light. A Monza-style gas cap, machined fins on the engine, and brushed aluminum details all contribute to the sturdy, bespoke feel. 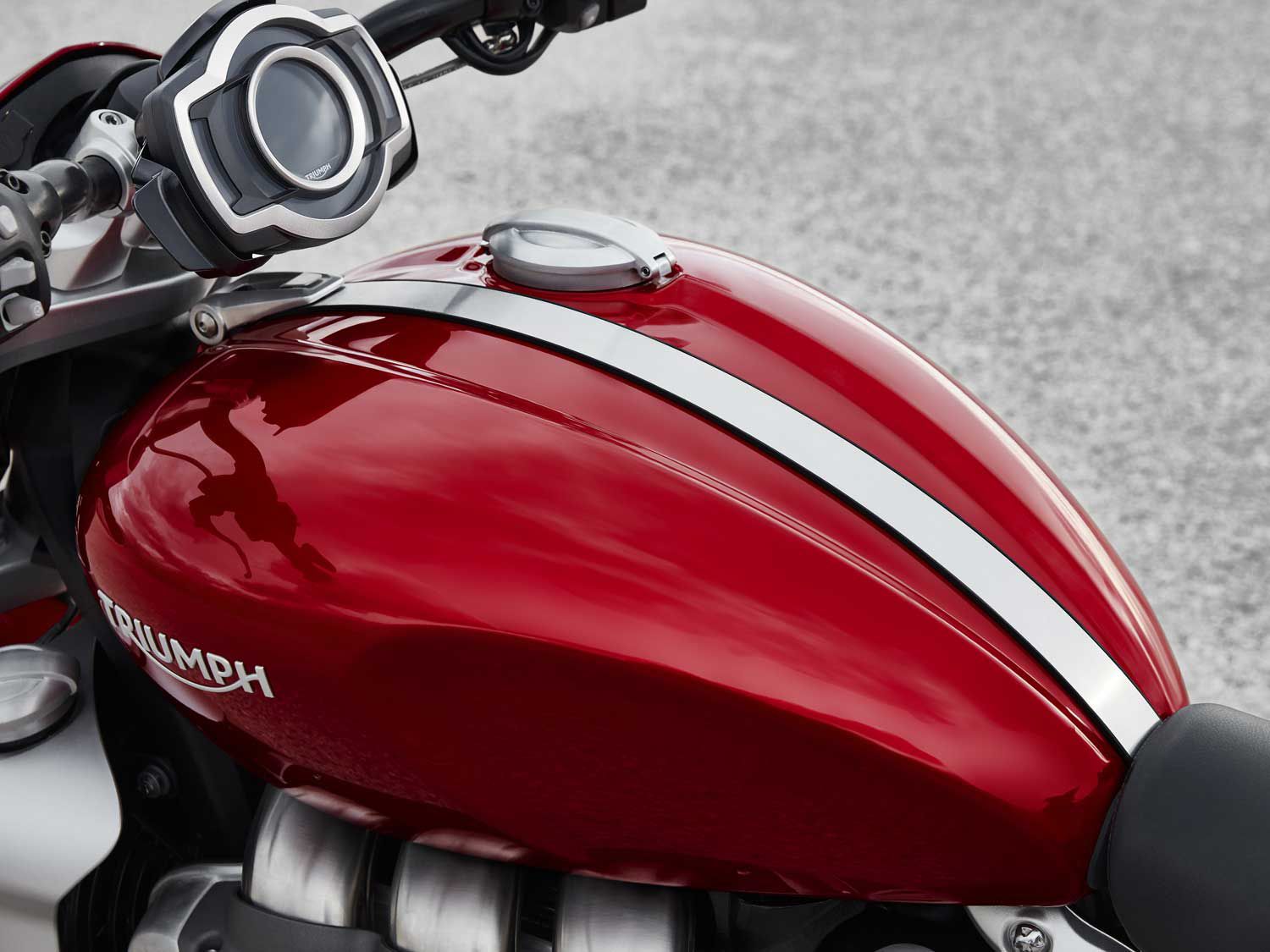 Like most riders at the beginning of the day, I expected the 3 R to steal the show, but as we switched back and forth between models, I grew more comfortable and confident on the GT. The ergonomics of the R are more conducive to aggressive riding, but on a bike this size, ergonomics were never my limiting factor. The cruiser-oriented model has all the performance capability of the roadster, but in a package that’s more comfortable on trips of any length. 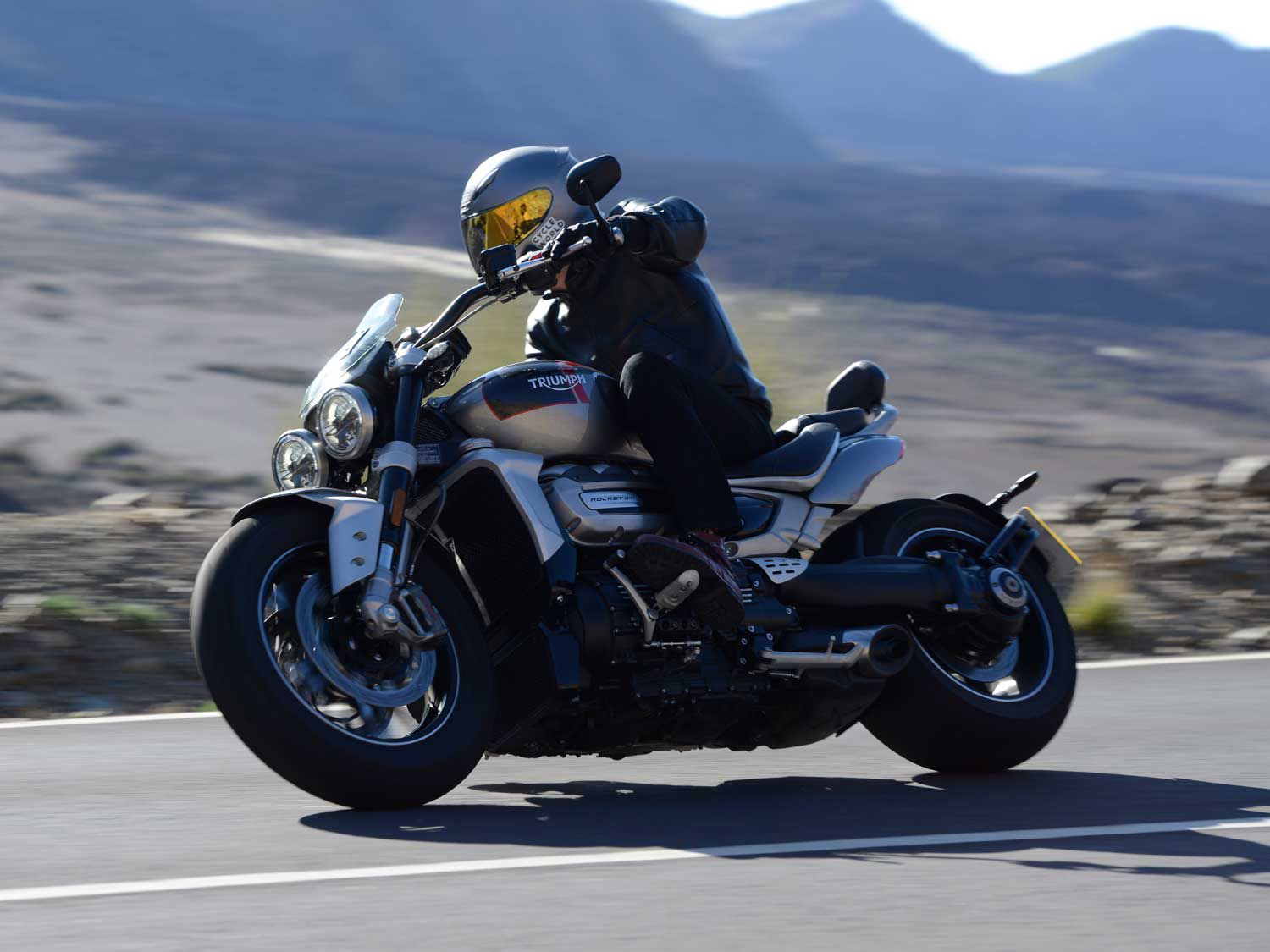 Both 2020 Rocket models are are currently in US dealerships. (Triumph Motorcycles/)

Triumph has radically improved this bike and made it genuinely easy to ride in both forms. From light-to-light and around town, the Roadster draws a lot of attention and its size demands respect, but the 3 R is just the biggest—rather than the best—tool for the job. As a cruiser, the weight of the GT is closer to its in-class average and more expected, so it’s much easier to appreciate the gains in power, style, and rideability. Both bikes look tough, like the biggest guy in the room usually does, but with matching performance, the GT’s ergonomics just make it more versatile.

For those chasing big power and gargantuan displacement, the Rocket 3 continues to be the pinnacle. And 2020 model owners will benefit from its added versatility. And for those who think the Rocket is nothing but big numbers, you are in for a surprise.