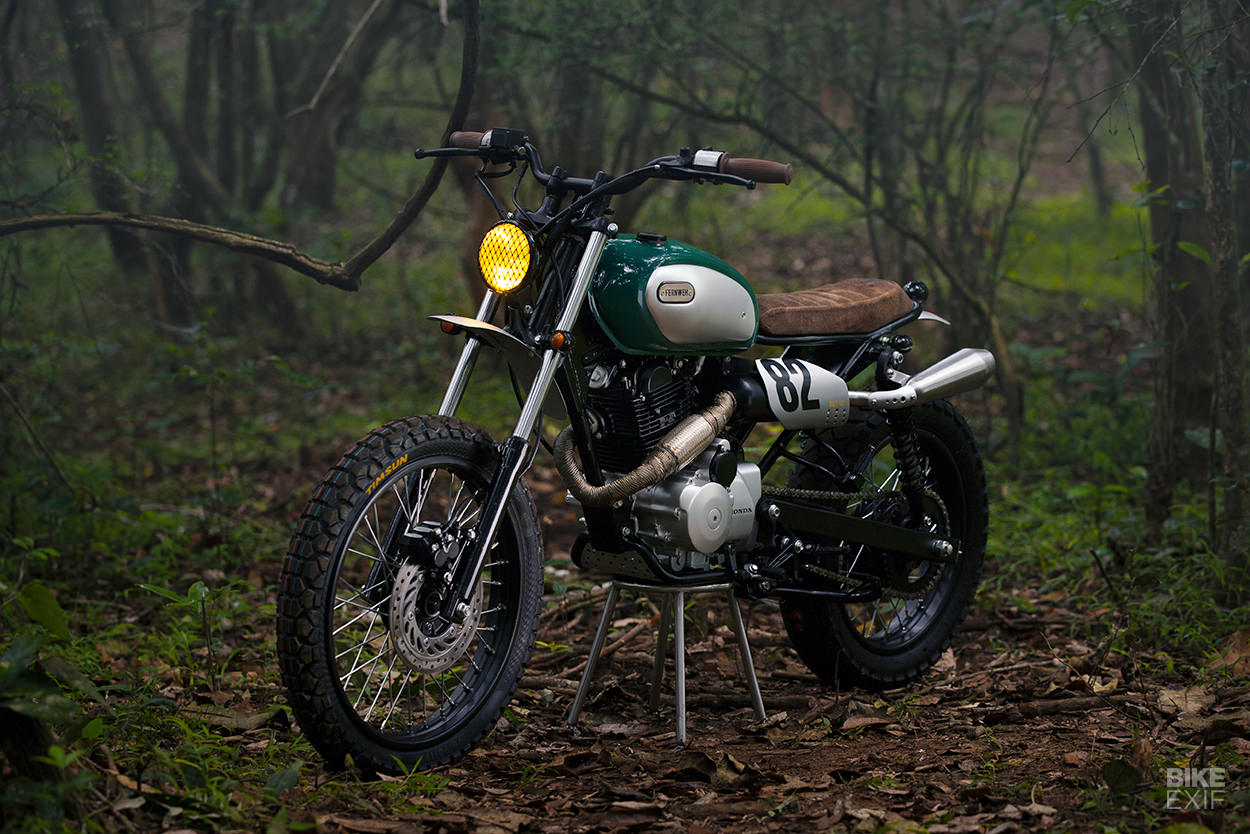 Some folks are dead set on making a career out of customizing bikes, even if they don’t have access to professional tools, a solid cashflow, or an easy supply of aftermarket parts.

Mohamed Adhil is one of those enterprising types, and we reckon he’s got a shot at making it work too—because he’s resourceful and he’s persistent. 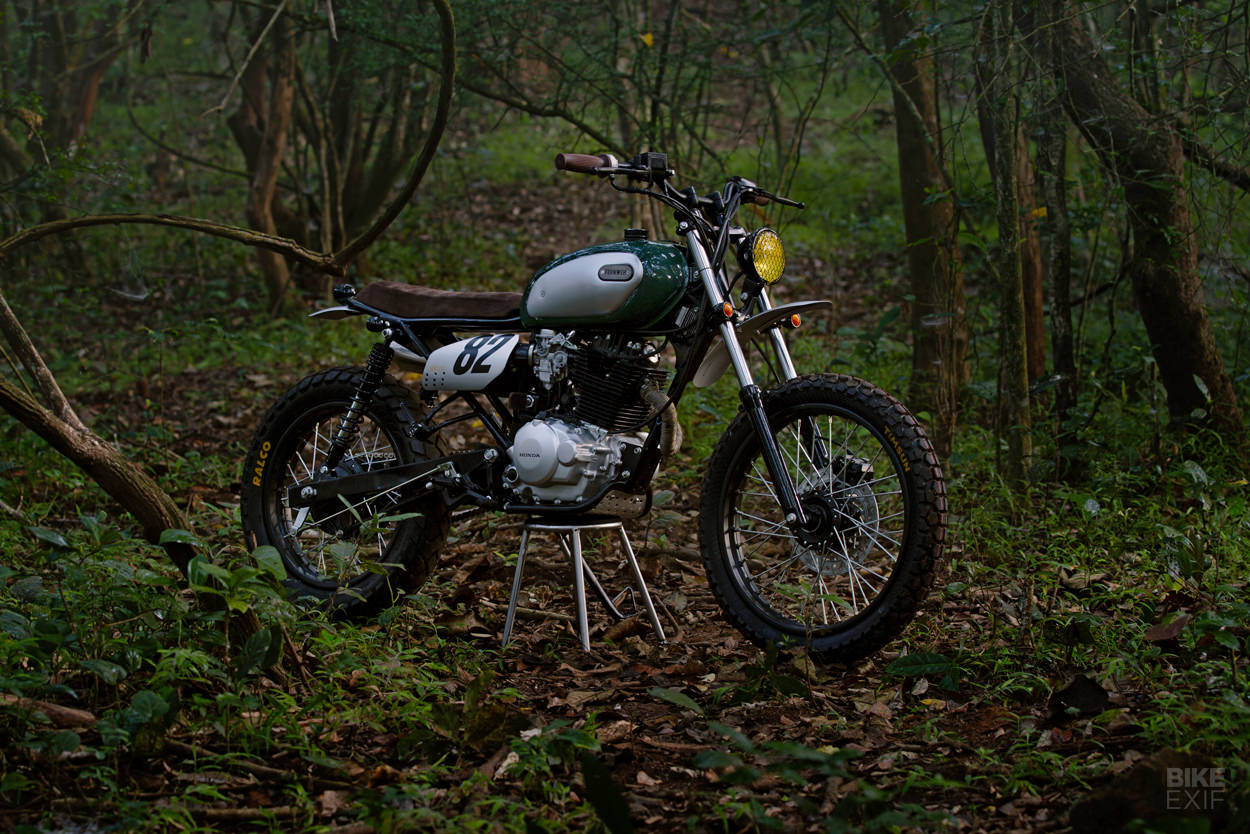 This neat Hero Karizma scrambler is his first build. It took over two years to complete, went through a couple of major revisions, and shattered the budget. And Adhil did most of the work in the back yard of his home in the coastal city of Calicut, in India’s Kerala province.

The bike started life as 2012 Hero Karizma R. Unless you live in India, you probably don’t know this machine, but it’s a 223 cc road bike powered by a detuned version of the Honda CRF230 motor, and with styling supposedly inspired by the VFR800. 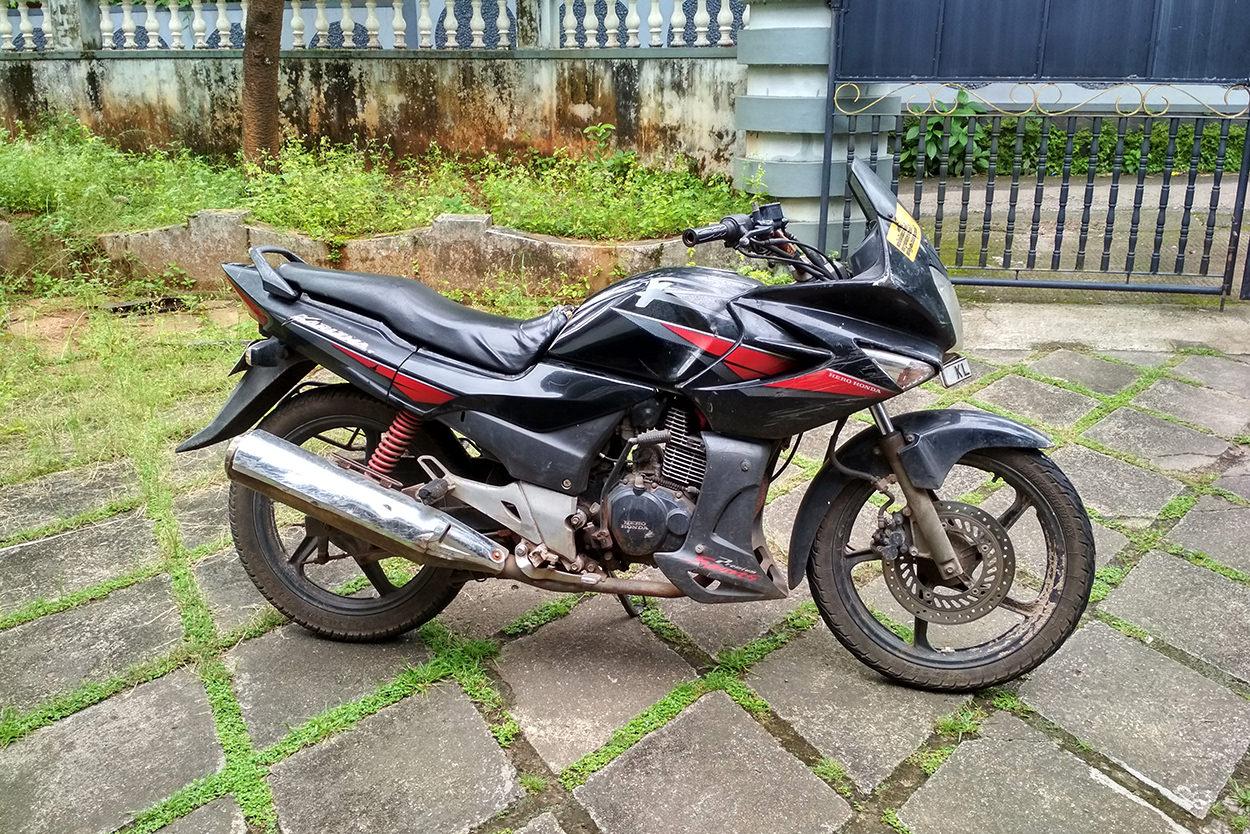 “A friend of mine asked me repeatedly to work on his bike,” Adhil tells us. “He wanted to convert it into a scrambler. I kept saying no, as my focus was on getting a regular job to make a living. But in the end, I said yes, because I knew I would regret it if I didn’t take the opportunity.”

Adhil thought the project would be simple: he would figure out what needed doing, and find craftsmen to execute his vision. But then he stripped the Karizma down, and realized that he wanted to be hands on with it. “Once all the body panels were removed,” he says, “all that was left was a skinny, low slung chassis with mag wheels. A lot of things had to be changed to make it a proper tough scrambler.” 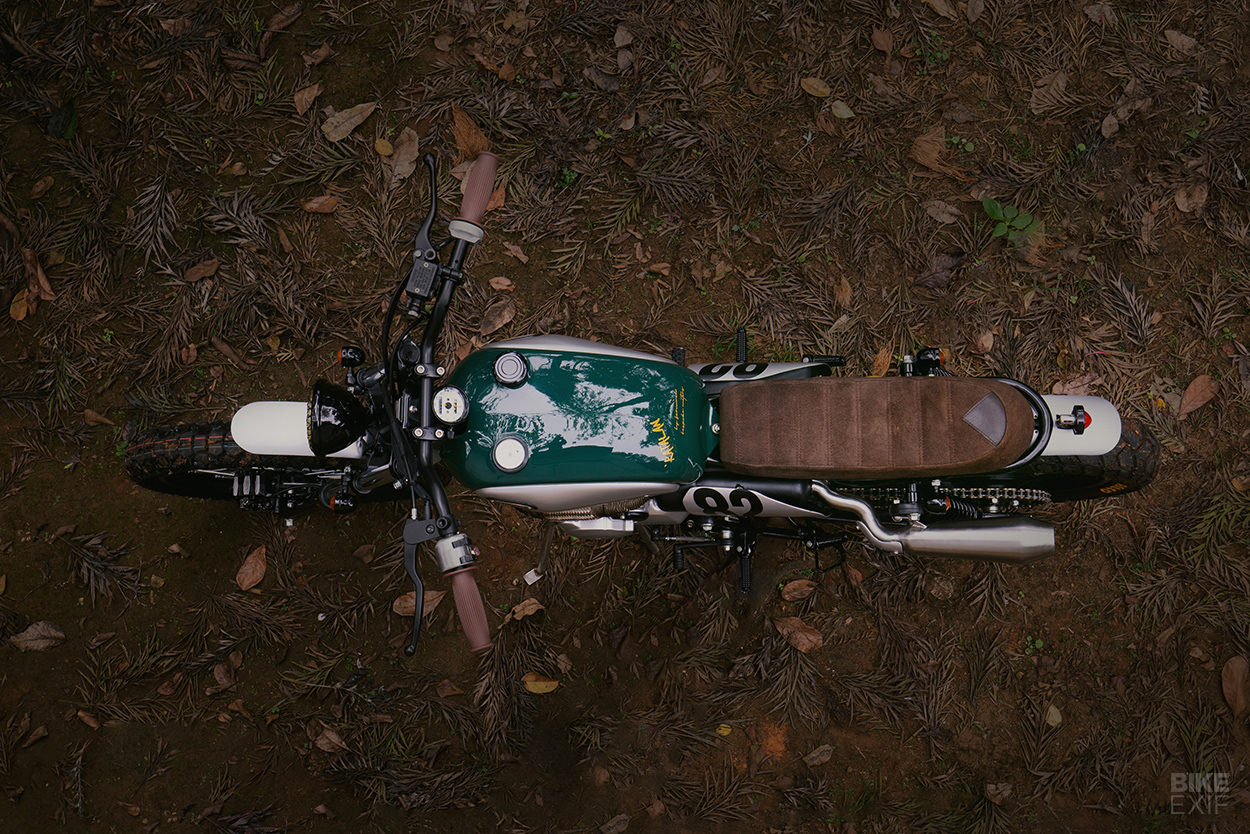 Adhil bought a small vise, a vernier caliper and an angle grinder. “And I borrowed a drill…that was pretty much all it took to get the build done.”

His first mission was to change the Karizma’s stance from small sports tourer to scrambler, so he starting sourcing parts from current and older motorcycles common in India. 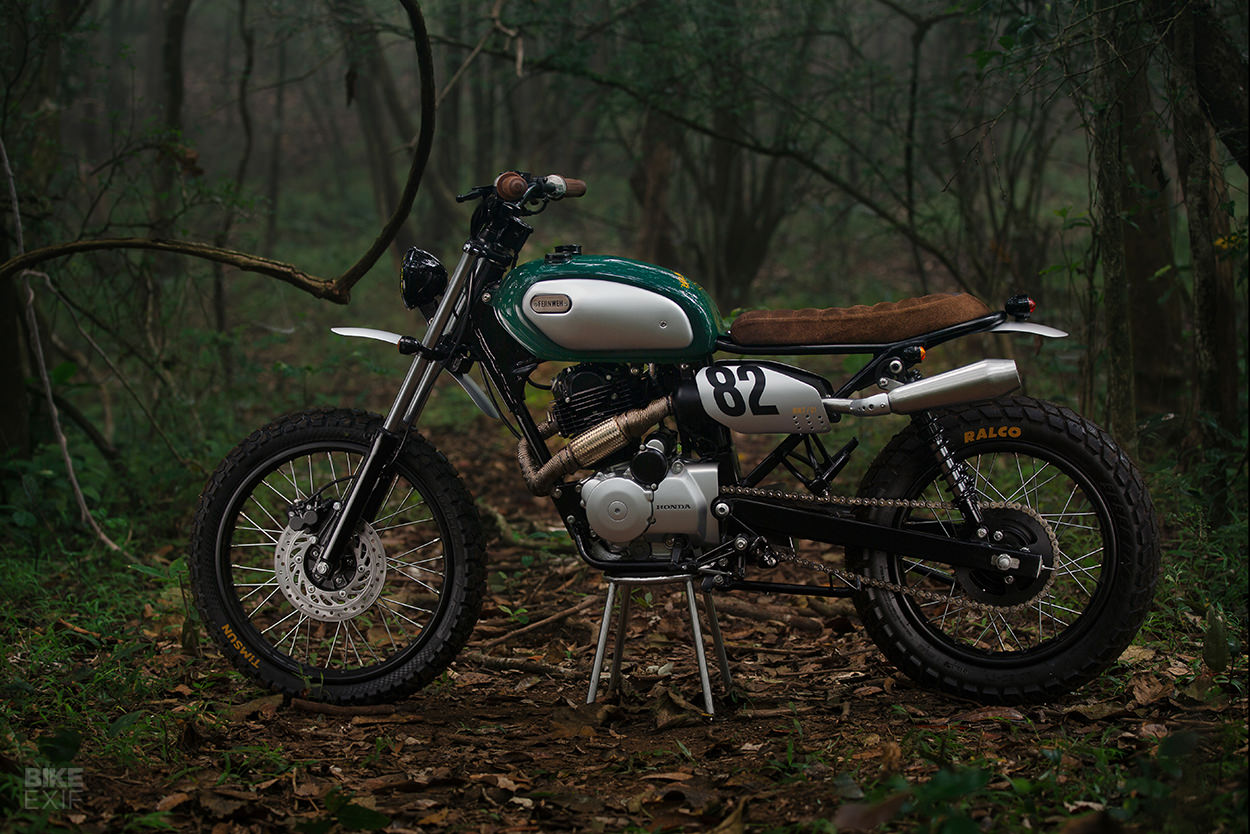 The 19” front rim is from a Honda Impulse, the 17” rear is from a Royal Enfield Himalayan, and the hubs are from a Honda CB Unicorn. Adhil fitted the rear shocks from a 150 cc Yamaha commuter, but the front proved to be more challenging.

He figured out that a set of Hero Impulse forks would do the trick, but couldn’t find a set. What he did manage to source was a new set of triple clamps—so he fitted those, and modded two other sets of forks to build what he needed. But after all that effort (and after these photos were taken), a set of Impulse items popped up, and have since been swapped out. 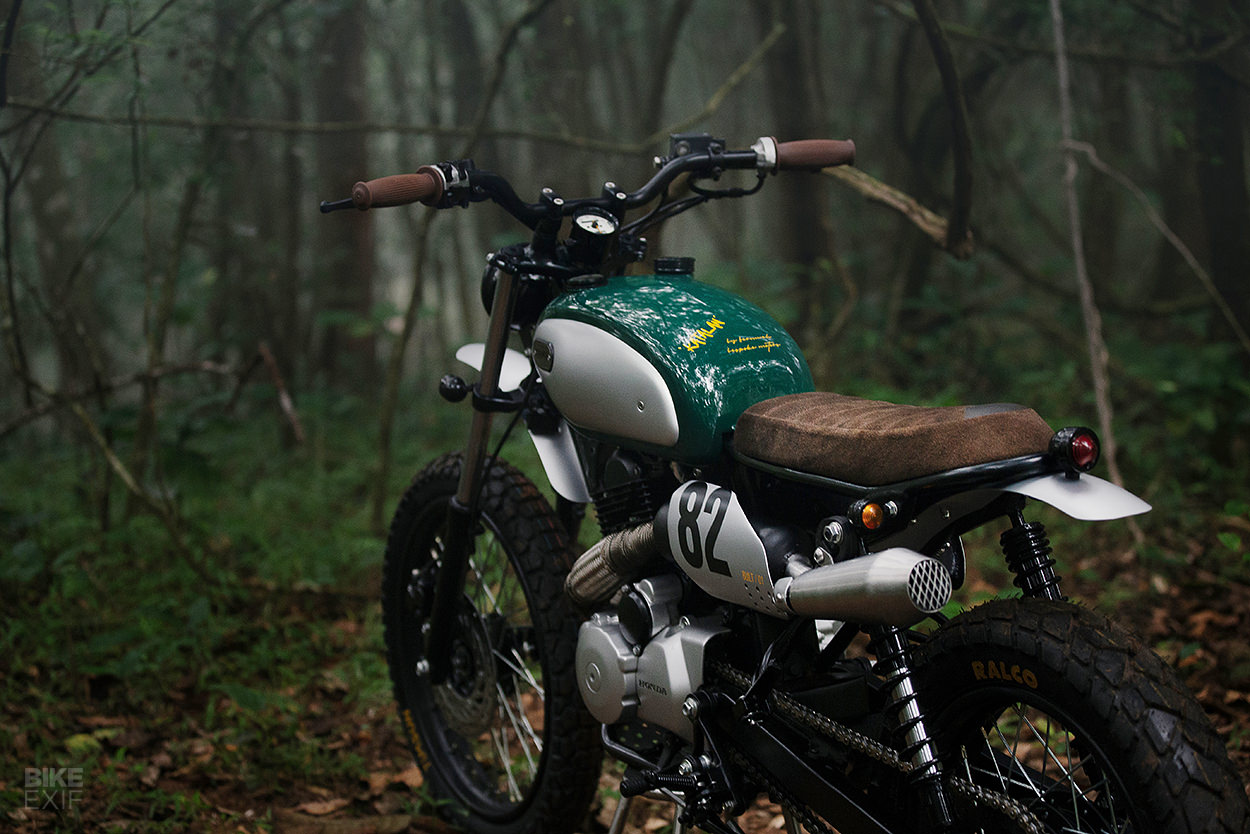 Next up, Adhil jumped onto the frame—trimming off the excess, and shortening and looping the tail. He also fabricated a new seat pan, shaped up the foam, and then set to work on smaller custom pieces to tie everything together. And he cut the front and rear fenders from a single Royal Enfield Bullet item.

Adhil’s fully aware of his own limitations, and one of those is welding. So his process was to lay everything up on the bike, then take it all over to professional welders to finish off. 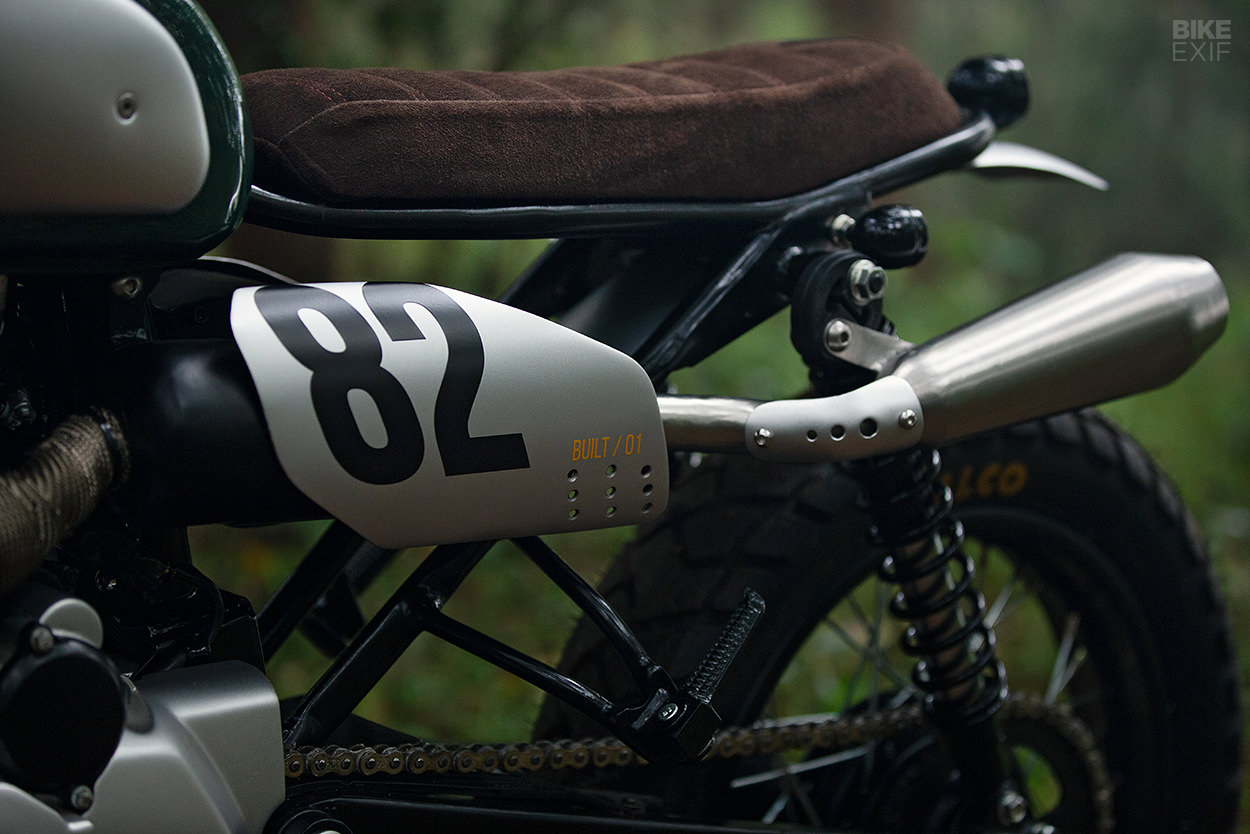 Those floating side panels are his own creations though. They double as heat shields too, and hide away the blacked-out exhaust muffler boxes. The rest of the exhaust system is Adhil’s own work, fabricated from stainless steel.

He even built his own air box. “I feel like open pod filters don’t work properly on carburated bikes in dusty Indian riding conditions.” 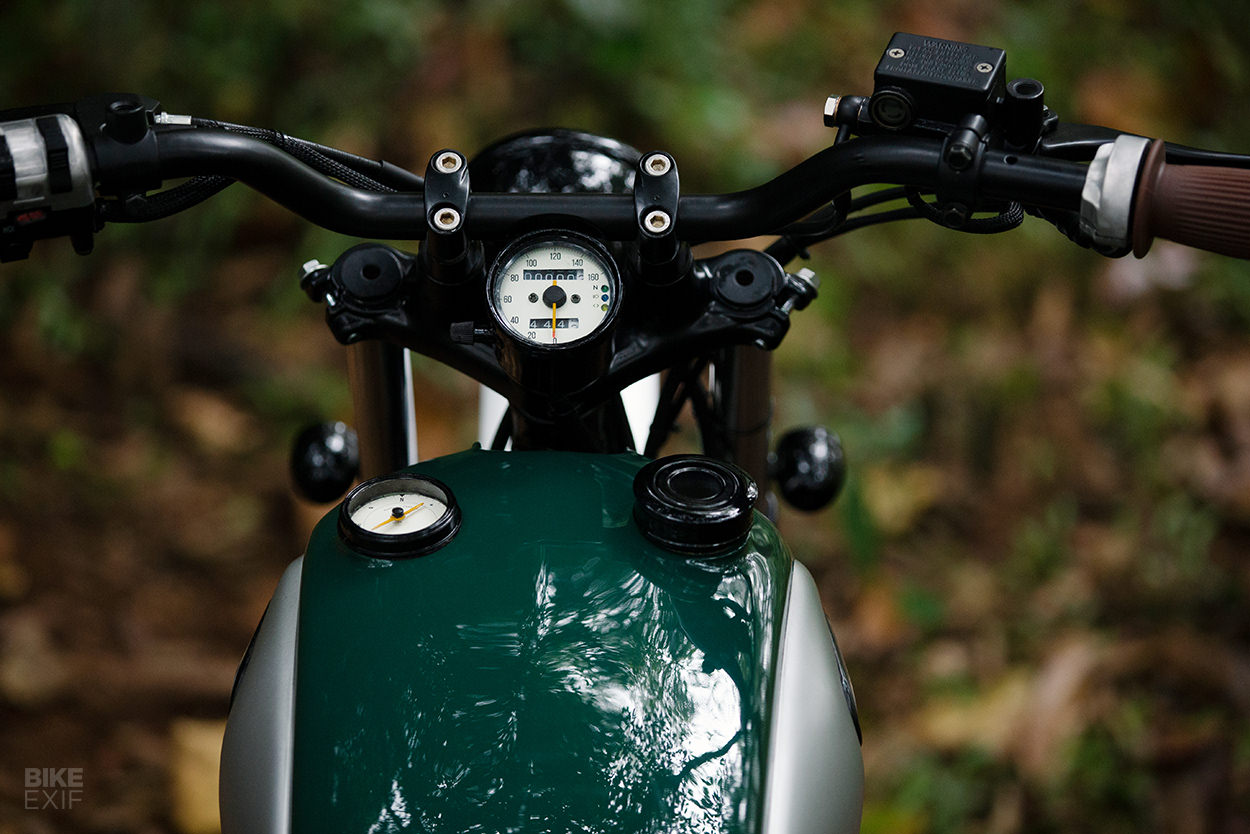 Adhil has finished the Karizma with off-the-shelf handlebars, grips, lights and turn signals, and a tank that he bought off a scrap dealer. He made a host of small changes too; a custom gearshift linkage, custom passenger pegs, and a full rewire. But he wasn’t happy: “I still felt like the tank was a bit too long, and with the seat stitching badly done, I felt like it was too basic and too common of a design.”

“At the very beginning of the build, my plan was to build something that was ‘common,’ but build it really clean and technically right—up to international standards. Which is not commonly done in India.” 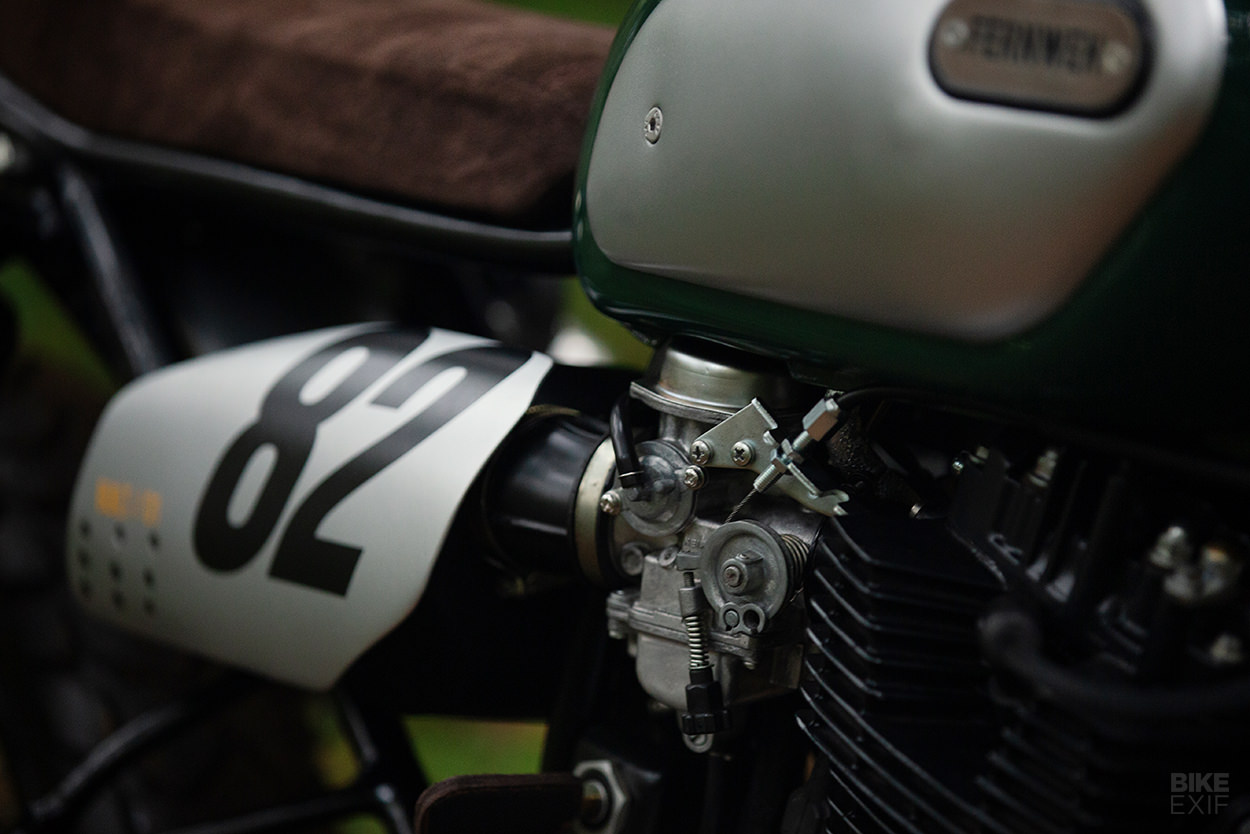 “People here still feel like customizing will ruin a bike, so I wanted to prove to everyone that it can be done—and also prove to people that I can get it done.”

Adhil tore into phase two, and soon spotted a bike on Instagram that had the perfect tank for his build. It was a Yamaha RD 175, sold in India in the 80s under the Rajdoot brand. The new tank went on, the side panels were reshaped to complement it, and the seat went through three more iterations at the upholsterer before it was perfect. 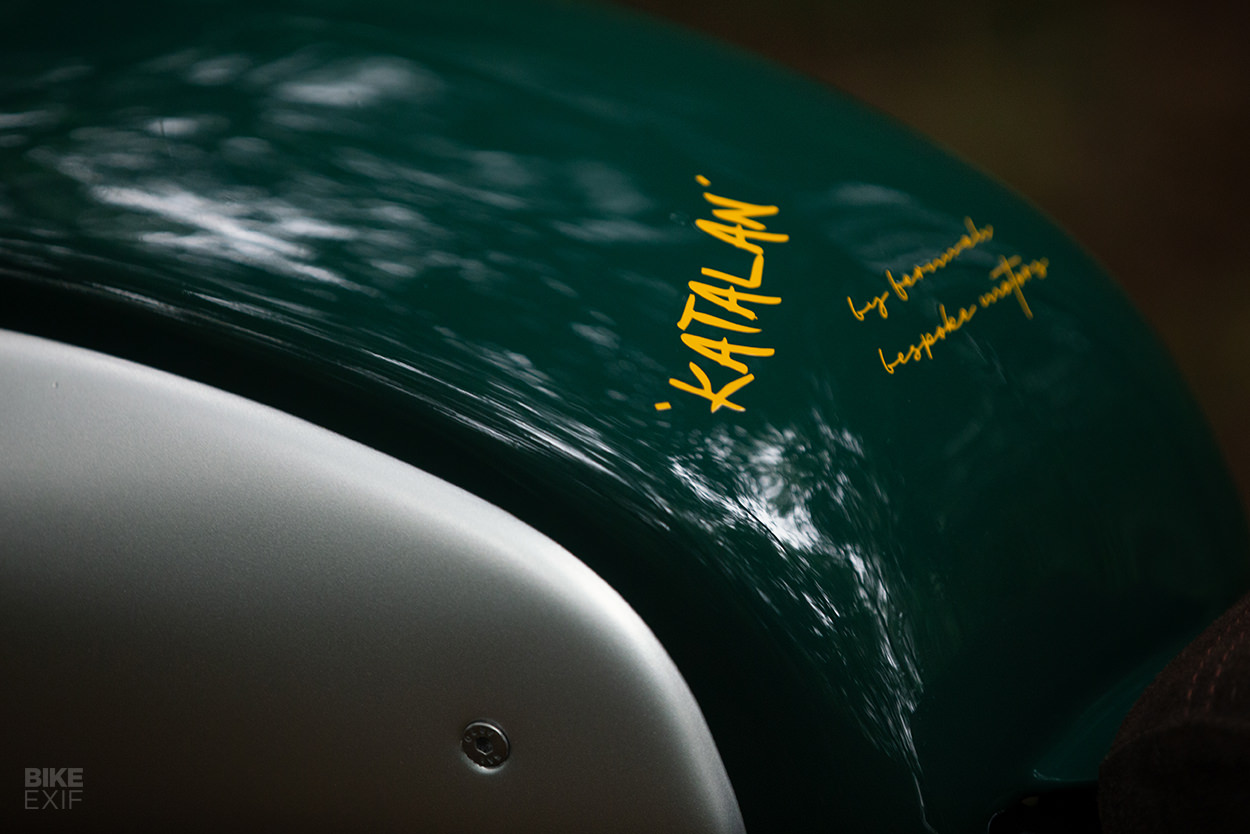 Adhil named the bike ‘Katalan,’ which, in his native language of Malayalam, means ‘a hunter born in the wild.’ It’s also the first build from Adhil’s newly formed brand, Fernweh Bespoke Motors.

And if this is what he can do with a handful of tools in a back yard, we’re looking forward to seeing him grow. 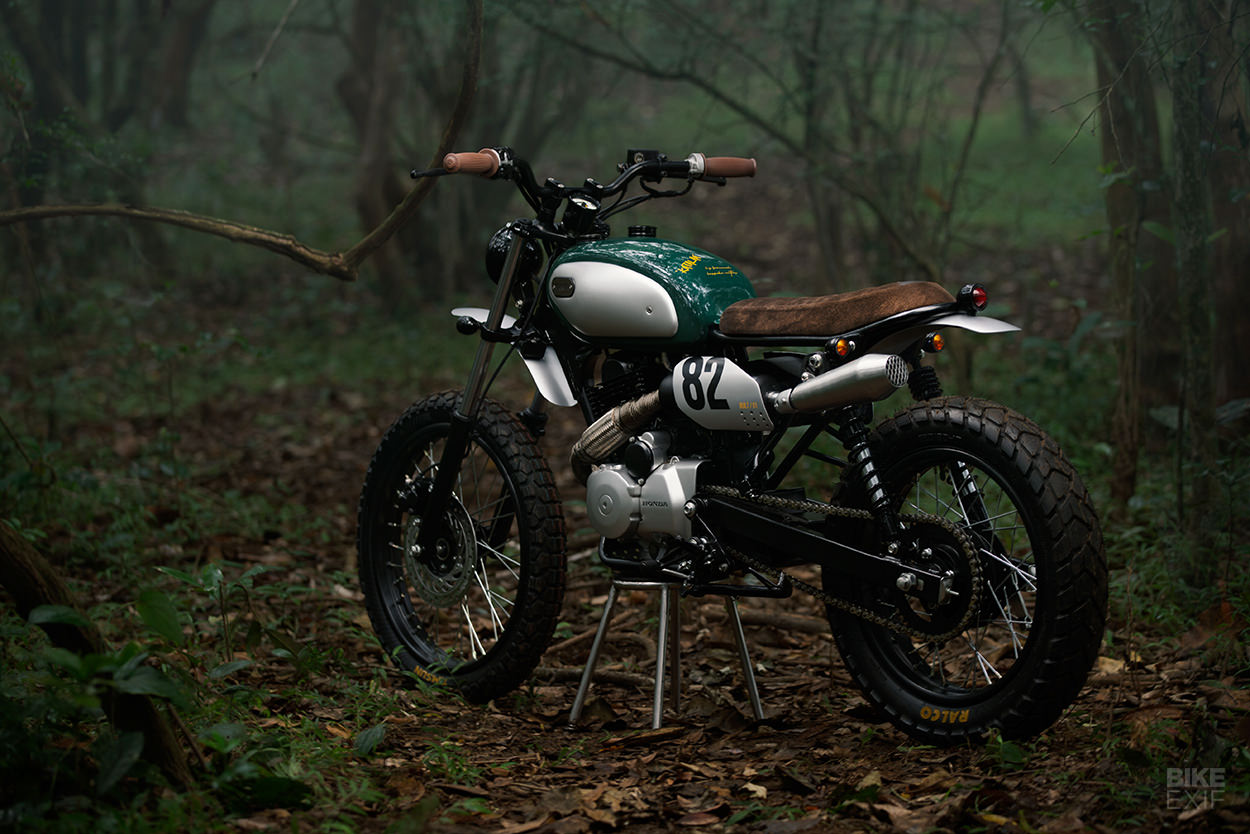