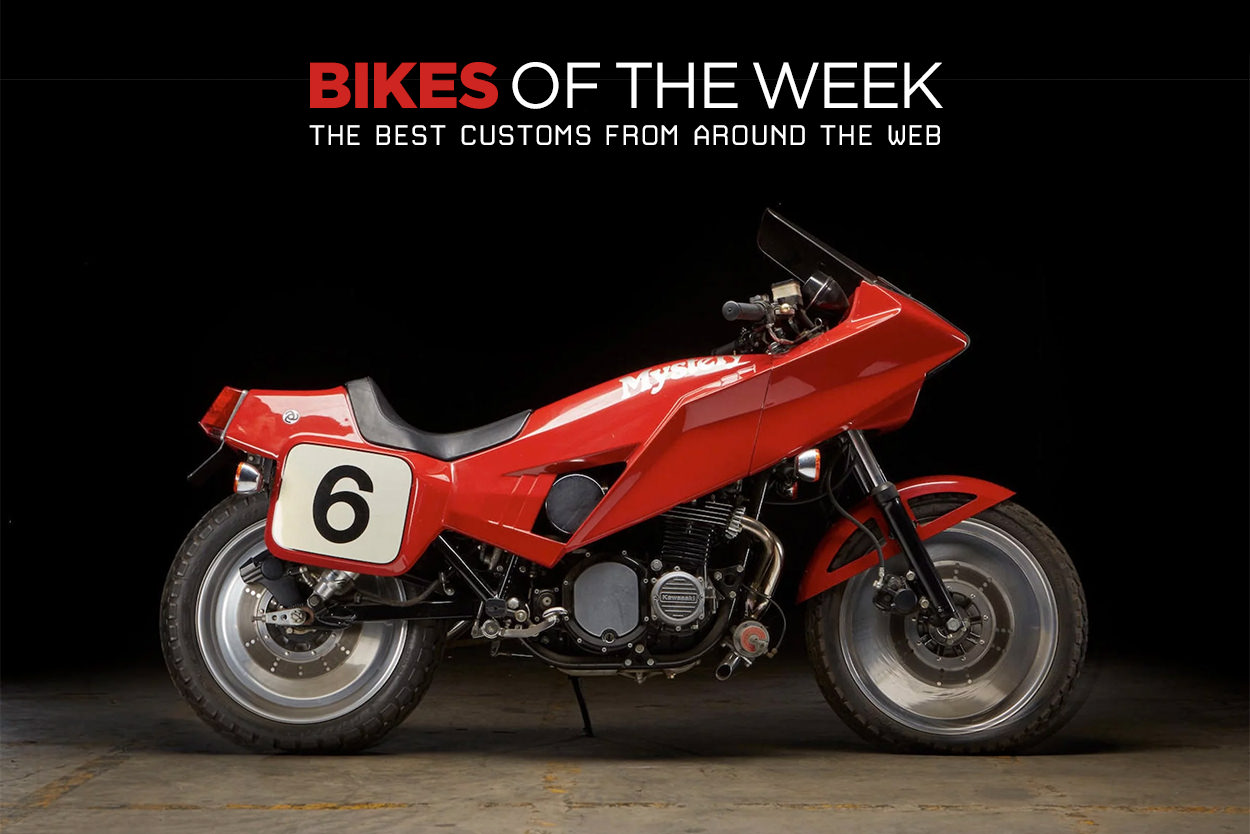 A box fresh turbocharged Kawasaki Mystery Ship, a slinky Yamaha Virago cafe racer from Spain, a Henderson Model G converted into a vintage board track racer, and a Honda Dominator with a Dakar rally vibe. 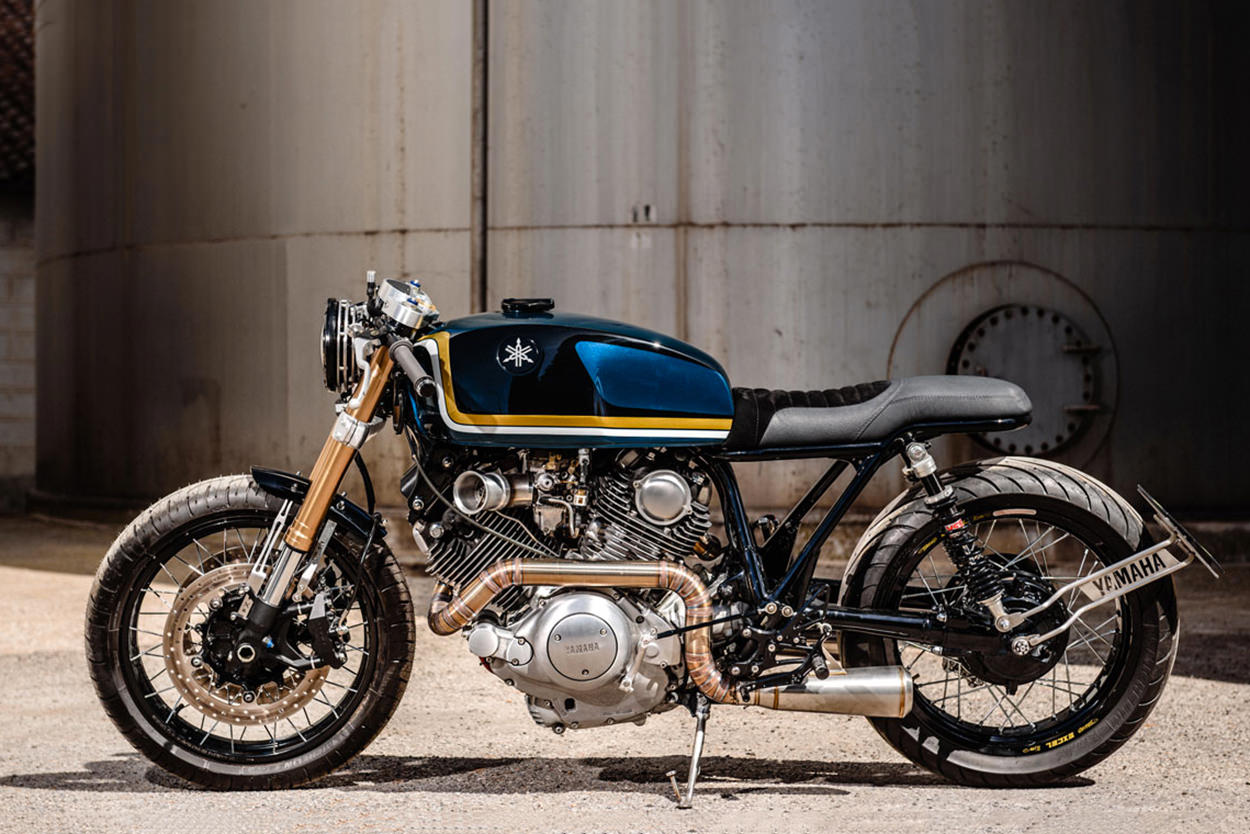 Yamaha Virago by VooDoo Garage The Yamaha Virago was one of the surprise custom hits of the last decade. It seems like an unlikely candidate for a cafe racer build, yet time and time again builders manage to whip it into shape.

The thing is, a lot of Virago cafe racers follow the same formula; often including a classic Benelli fuel tank and a waspish tail. This XV1100 from VooDoo Garage in Spain bucks that trend, and it’s all the better for it.

In an inspired move, VooDoo installed the boxy fuel tank from a Laverda 1000J. But the biggest challenge here was massaging the Virago’s cruiser stance into something more palatable. It now features a custom subframe, new YSS shocks, Suzuki GSX-R forks and 18” Excel rims. 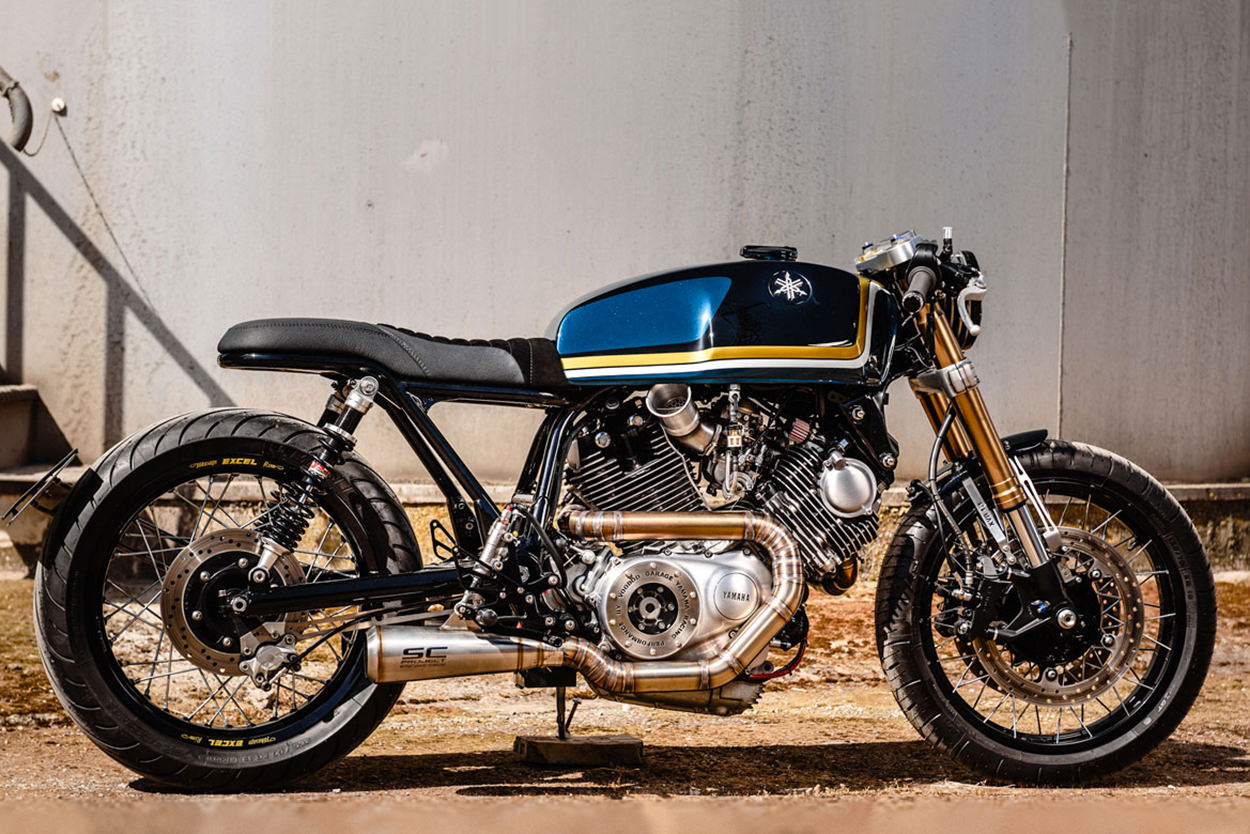 There’s a custom top yoke with an integrated Motogadget dash, clip-ons, new switches and an LED light. Every detail is top-shelf, from the two-finish seat to the neat Yamaha logo cut into the custom license plate bracket. The exhaust system is also unlike anything we’ve seen on a custom Virago; pie-cut headers running into twin mufflers. [More] 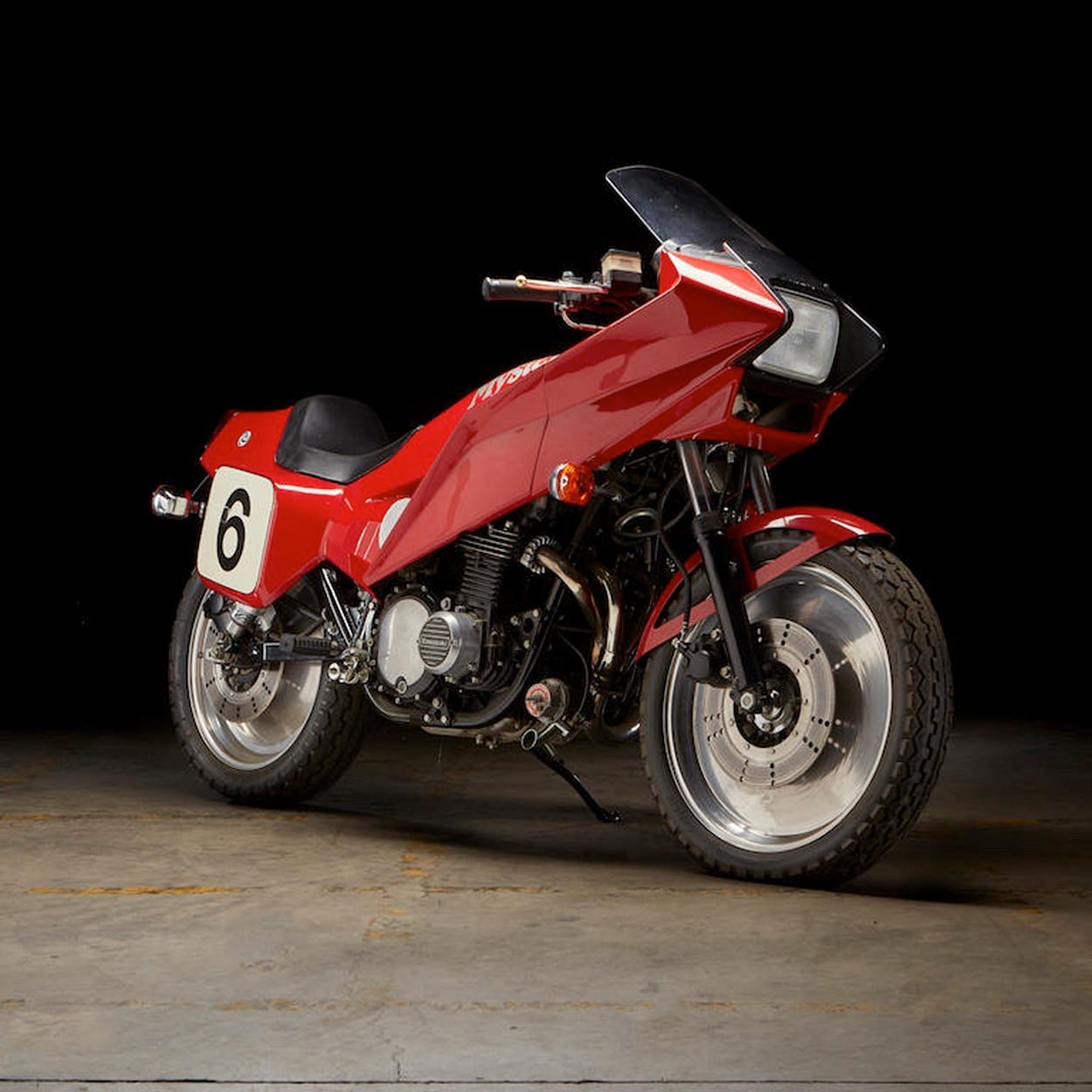 Craig Vetter was the man behind the legendary Windjammer fairing, and later the designer of the Triumph X-75 Hurricane and the Mystery Ship. The bike was based on a Kawasaki KZ1000, but it underwent extensive changes. Each KZ that was converted into a Mystery Ship underwent frame and geometry mods and suspension upgrades. 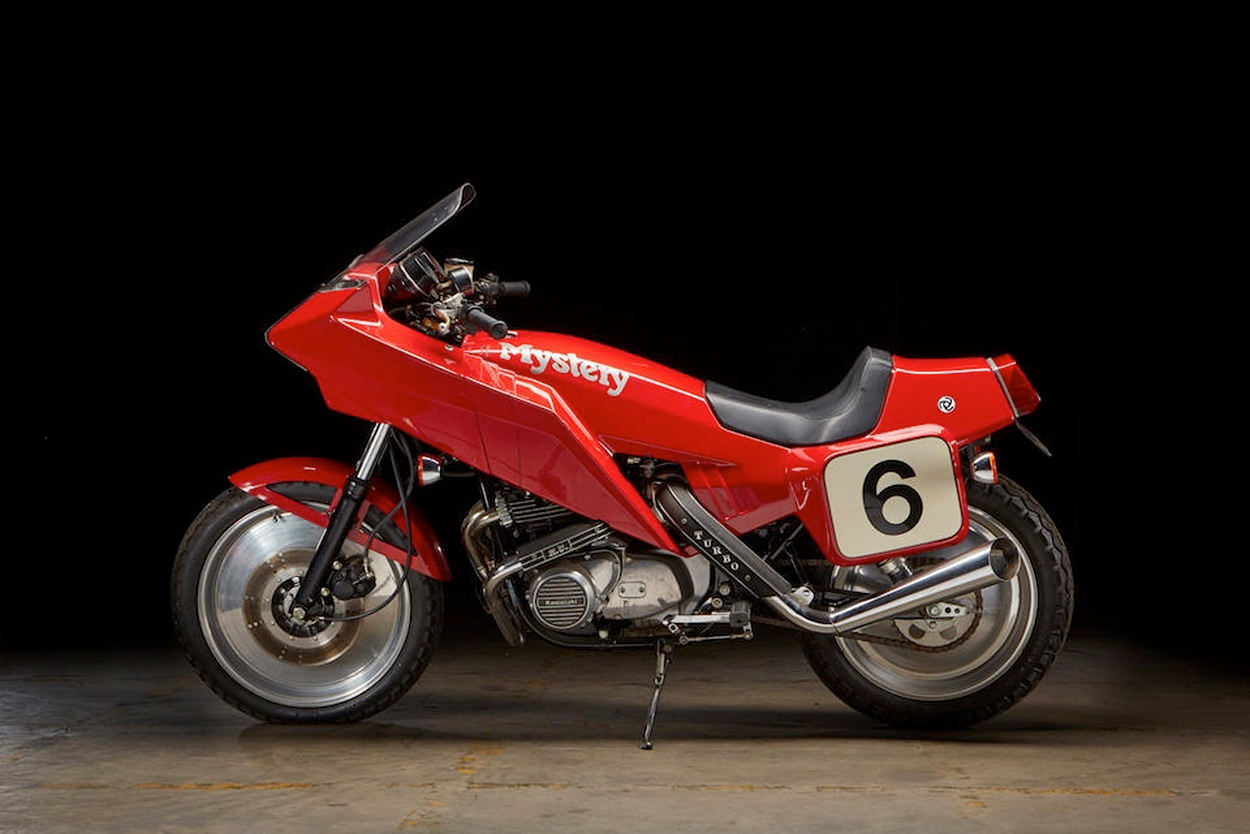 Then it got wrapped in a two-piece body kit, designed to be supremely aerodynamic. Only 10 Mystery Ships were built, and the one you see here was built with the top spec available—so it’s turbo-charged too.

To add to its rarity, only two Mystery Ships were ever built to that spec. And this one only shows two miles on the odo. [More] 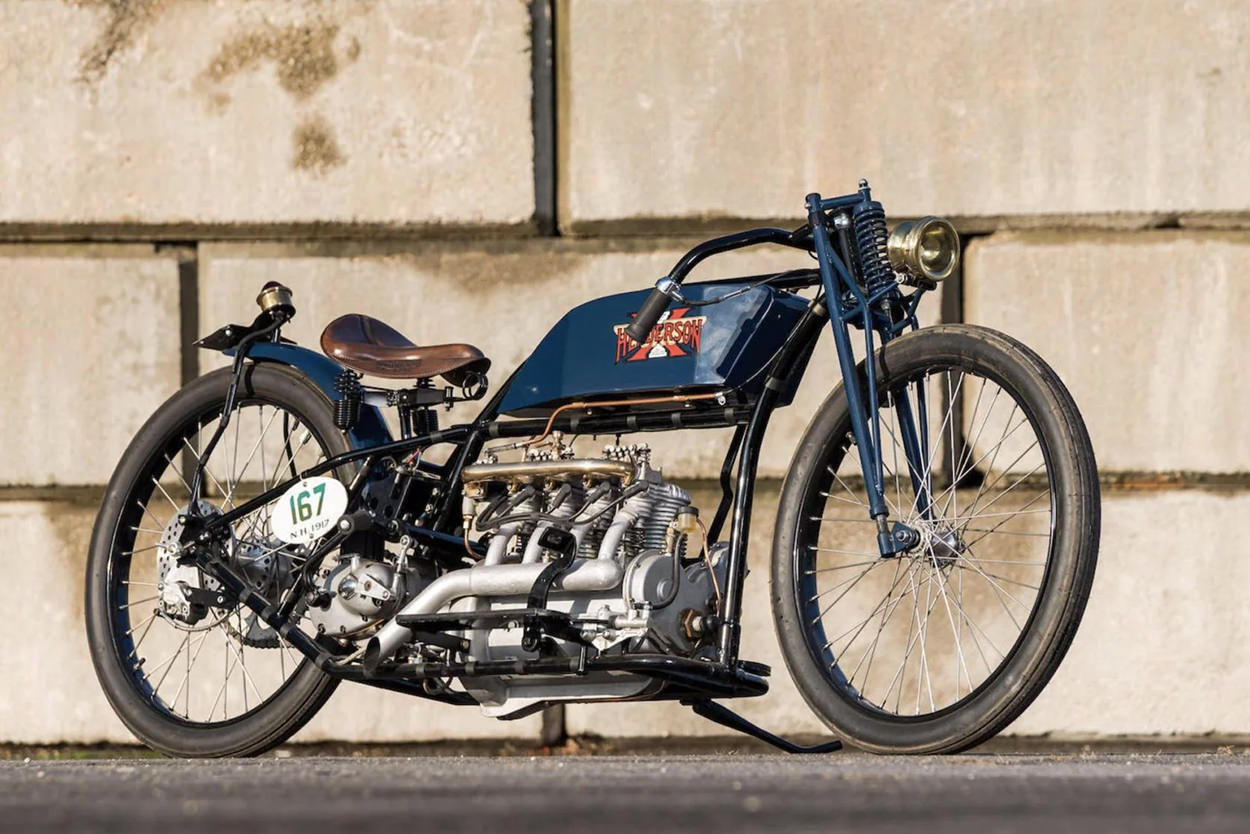 1917 Henderson Board Tracker The Mystery Ship isn’t the only rare machine up for auction at Bonhams. Our friends over at Silodrome have a nose for sniffing out unusual metal and this time, they’ve stumbled upon something truly special: a 1917-model Henderson Model G, converted in recent years into a vintage board track racer.

The Henderson Motorcycle Co. was the first American marque to produce four-cylinder motorcycles, long before they were commonplace. The Model G was a big deal back then, with a three-speed box, wet sump lubrication and a dry clutch. The thing is, Henderson never really competed in board track racing—taking part in endurance-style events instead. 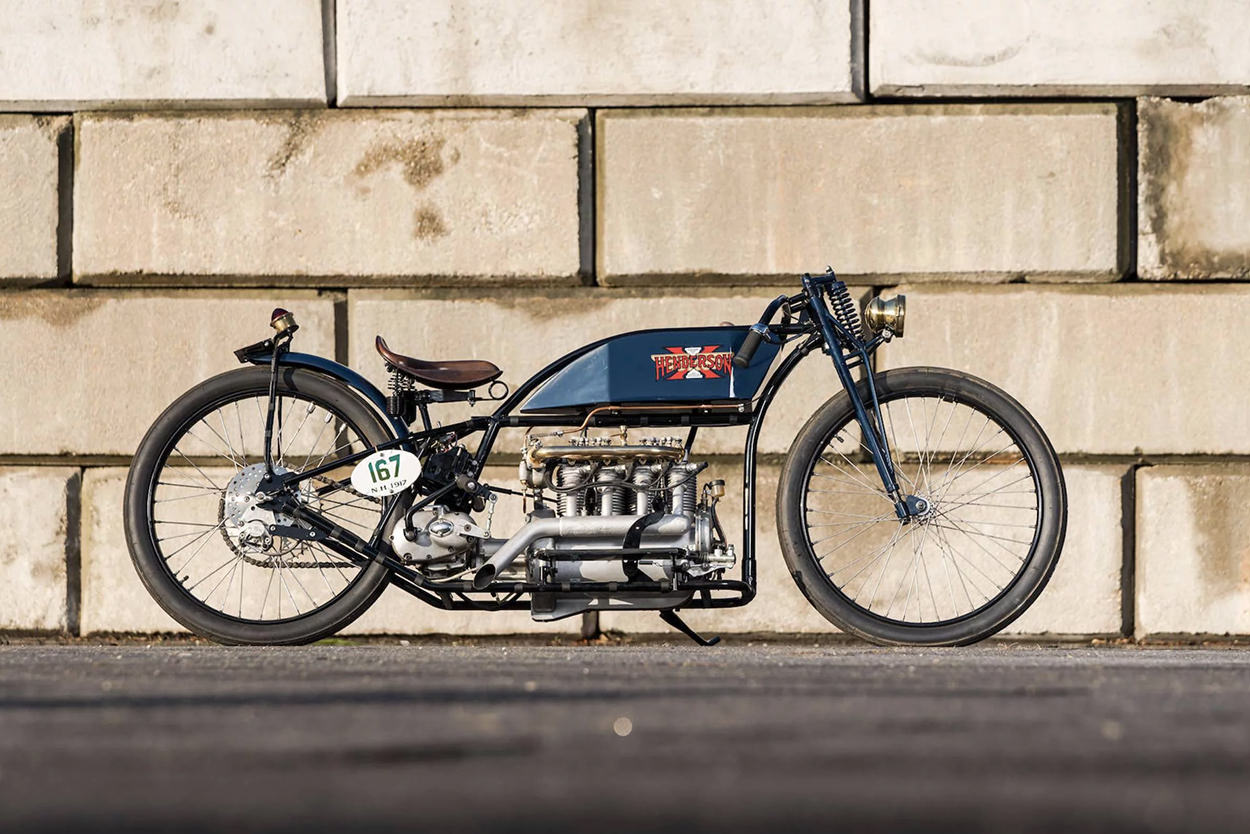 This Model G was actually rebuilt as a board track racer in recent years. It had ended up at the Wheels Through Time museum, sans its gear box, which had been cut off and used in an airplane. The motor was gifted to Paul Ousey by the museum, who decided to build this.

A new, period-correct frame was designed and built. It features a hard tail, a springer front end, a sprung saddle and low bars. The gear box is a three-speed Triumph unit, and the only sneaky modern part is a Brembo rear brake. (And it has lights now.) 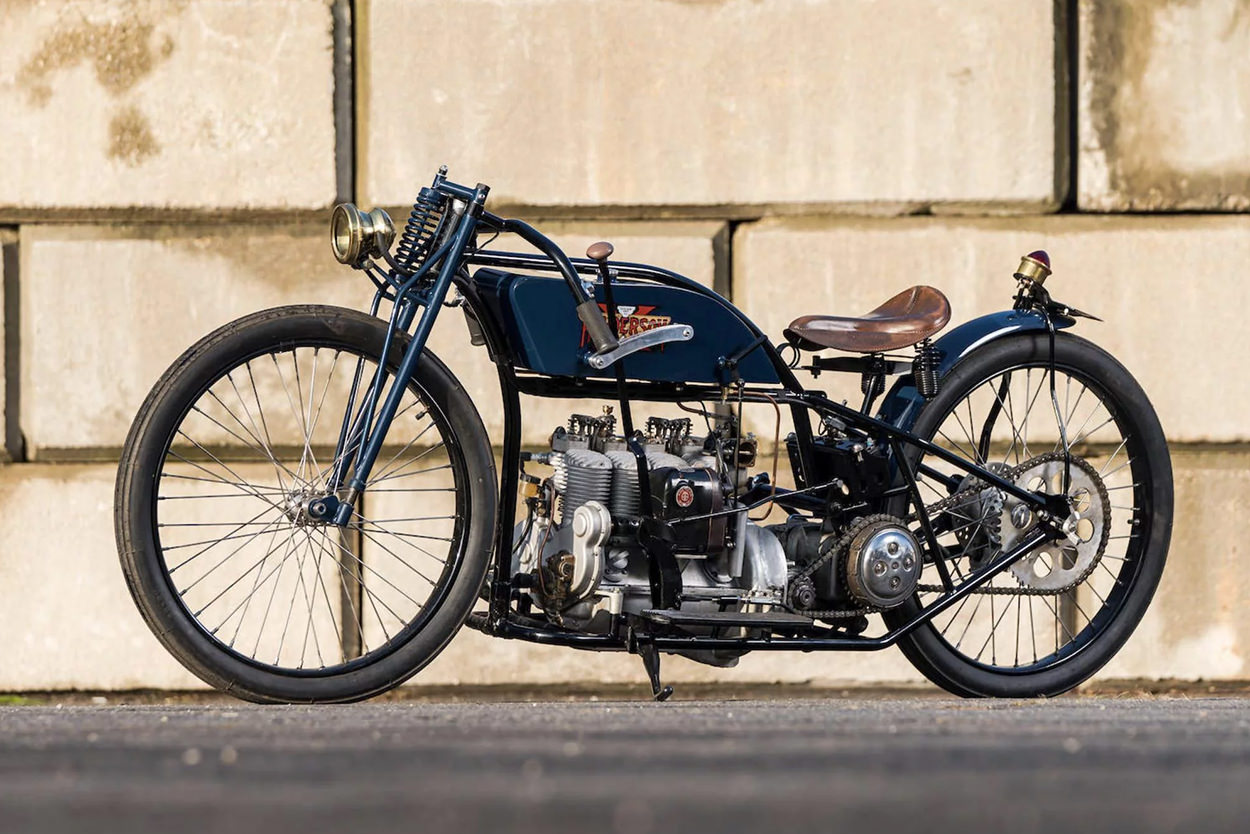 It runs, too. Once it was complete, it was raced at the Sons of Speed vintage board track event. It’s about to go on auction in Las Vegas by Bonhams, where it’s expected to fetch more or less the price of an Arch KRGT-1. Tempted? [More] 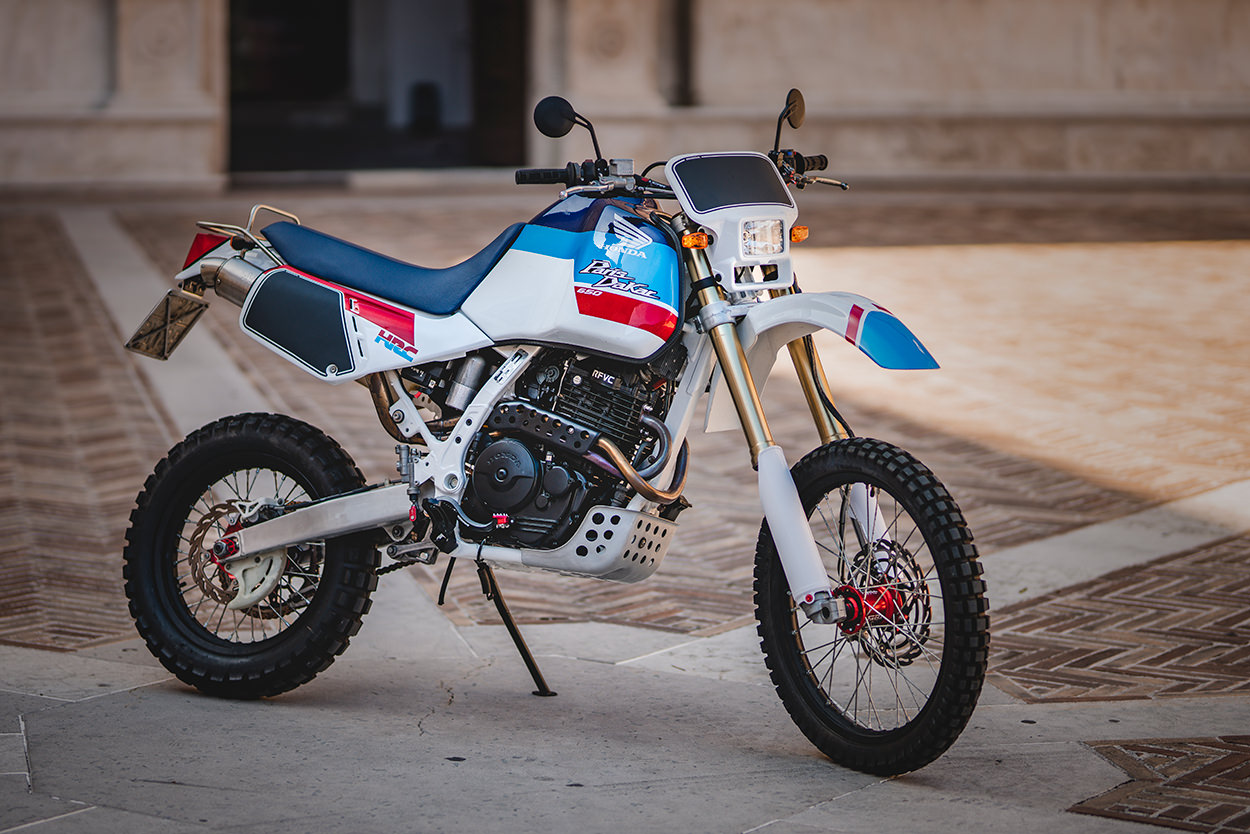 Honda Dominator by Mauro Gessi Ricky Brabec has just won the motorcycle class of the Dakar rally. That makes him the first American to take gold in the iconic event—but his win is significant for another reason. Ricky races for Honda, and so he’s just broken an 18-year Dakar winning streak by KTM.

To celebrate, here’s a look at a Honda scrambler with a big hit of classic Dakar styling. It’s a single-cylinder 650 cc Honda Dominator, reimagined with retro looks and modern upgrades. 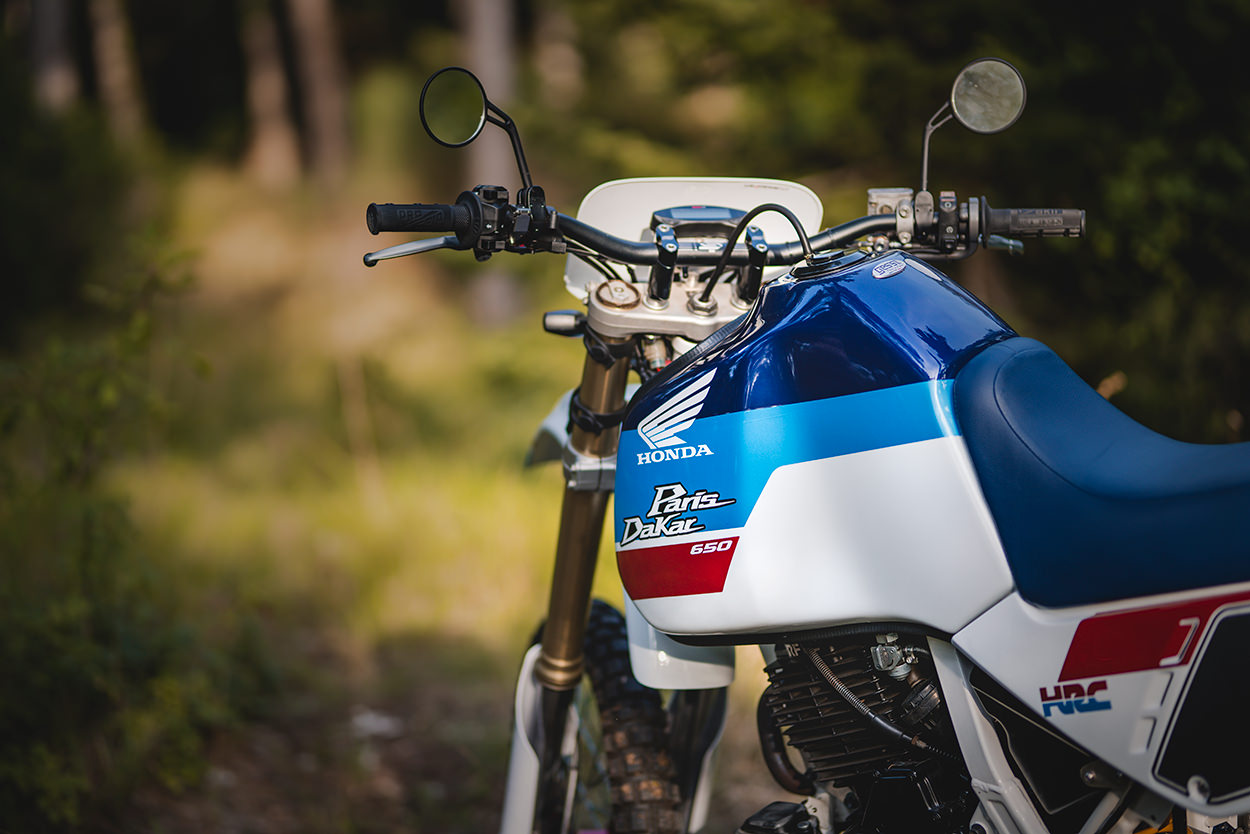 Most custom Dominators shy away from their classic dirt bike roots and end up as street trackers, but this one leans into its heritage. The bodywork is from a sister bike—the Honda XL 600 LM. But the forks, swing arm and rear shock are off the same Honda that Ricky’s Dakar-winning bike is based on: the CRF 450.

For the paint job, Mauro called up Oberdan Bezzi to whip up a few options. He settled on this classic Africa Twin-inspired livery, complete with ‘Paris Dakar’ logos in the same style as the Africa Twin’s original logotype. It’s the perfect finish for this retro desert racer. [Gessimotociclette Facebook | Images by Stefano Romagnoli] 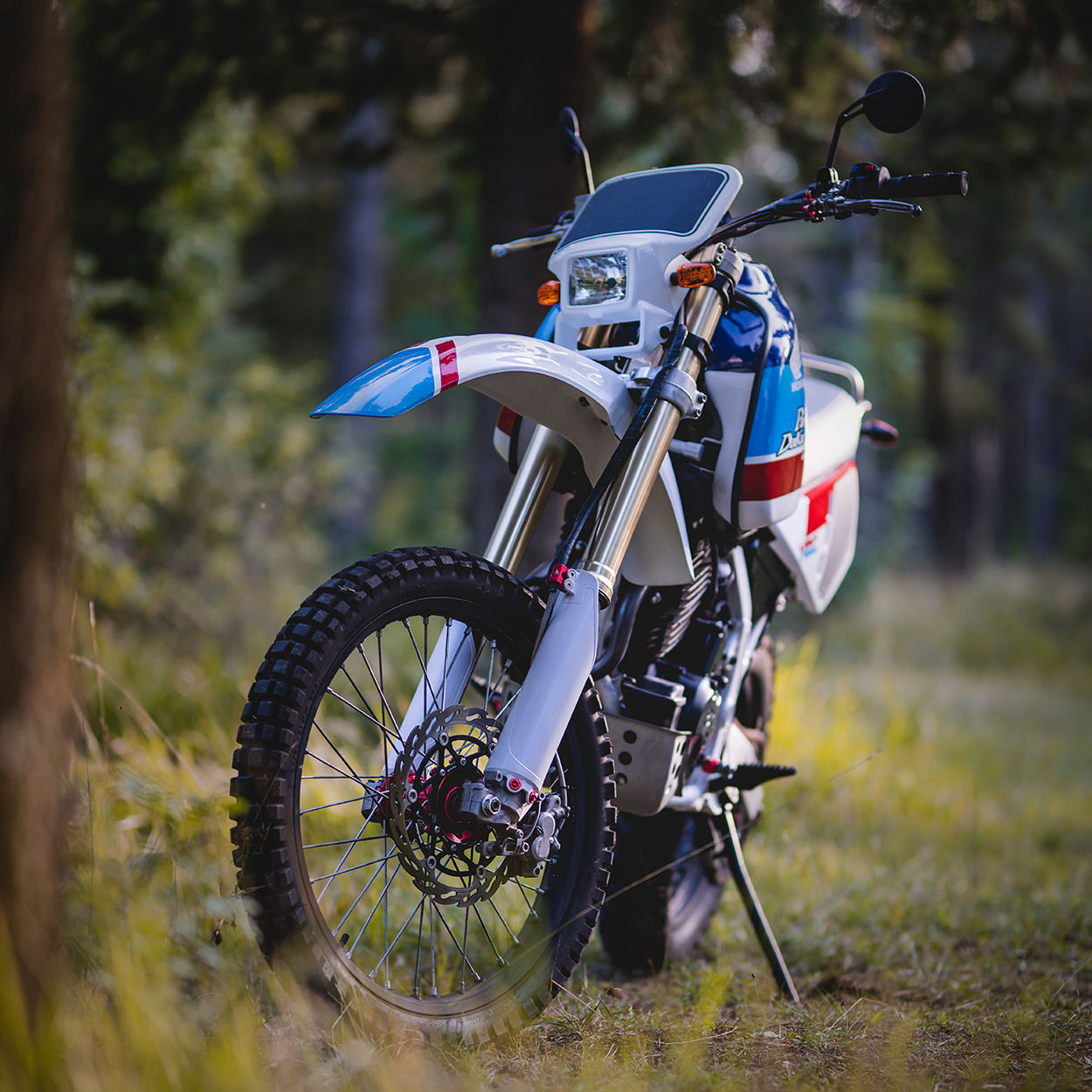