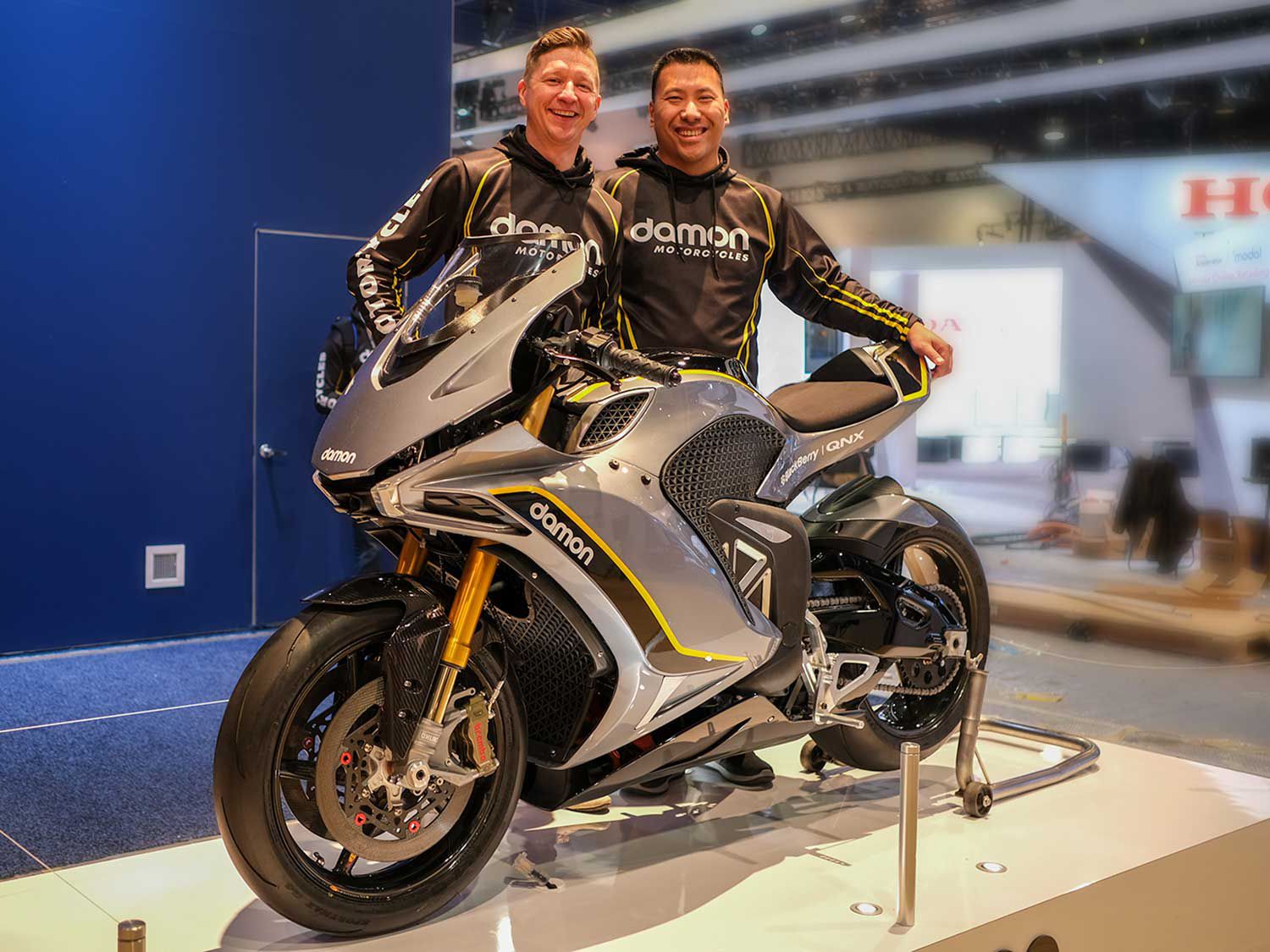 Damon Motorcycles made a splash at the Consumer Electronics Show in Las Vegas with its new Hypersport Premier Electric, garnering a Best in Innovation award for its smart tech electric motorcycle. One of the key features of the Hypersport is its CoPilot 360-degree safety system, built on BlackBerry QNX technology to provide a raft of analytic data to rider and machine about potential hazards, traffic patterns, rider intent data, and a whole lot more.

But the first question we should address is, who are Damon Motorcycles?

The Vancouver, British Columbia, company is fairly new, securing $2.5 million in seed financing last June to help make its dream of a safer, smarter motorcycle a reality. Jay Giraud is the founder and CEO of Damon, and a seasoned automotive tech entrepreneur with experience working to improve Yamaha’s mobility solutions, founding Mojio (an open app and services platform for cars) and advising Revio Telematics, an electronic safety product producer that focuses on powersports and other high-risk vehicles.

Giraud is joined by engineer co-founder and CTO Dom Kwong and former president of Alta Motors Derek Dorresteyn. The advisory board has a similarly impressive roster of overseers, so it’s clear Damon Motorcycles isn’t here to play games.

What’s Special About The Damon Hypersport?

Especially with technology like CoPilot. This system utilizes cameras, radar, and other non-visual sensors to track speed, direction and velocity of up to 64 objects around the motorcycle. Pedestrians, other cars, random animals hopping out of bushes, all of the things that could make a good day on a bike a bad day on a bike.

It has embedded 4G, Wi-Fi, and Bluetooth connectivity. As you ride, Damon aggregates data taken from the bike and seeks for ways to improve system performance. These updates need to be approved by the rider prior to being implemented, similar to Tesla’s approach.

As if that weren’t enough, the bike is said, in its best Premier trim, to reach up to 200 mph and be capable of going more than 200 miles on a single charge. It charges fully in less than three hours on a Level 2 charging station, has Brembo braking kit and Öhlins suspension, but there’s no mention of the source or specs of the powerplant, beyond its performance capabilities. The Premier is a limited run option, with only 25 units planned for production.

However, there is a standard Hypersport HS that has similarly impressive specs, sans up-spec suspension and braking equipment. It will start at $24,995.

“We’re on a mission to unleash the full potential of personal mobility for the world’s commuters, while reducing rider incidents on the road,” Giraud said in a company press release. “To address this, we spent the last three years developing an AI-powered, fully connected, e-motorcycle platform that incorporates CoPilot, our proprietary 360º warning system. By building it on BlackBerry’s best-in-class technology that is safety certified, Damon motorcycles will be the safest, most advanced electric motorcycles on the market.”

“We prioritized data-driven thinking at the epicenter of the company, employing radical innovations in sensor fusion, robotics, and AI,” Kwong adds. “This level of deep learning and connectivity are unprecedented, ensuring each rider a smarter, safer, and connected ride; not only for individuals but for entire communities, with the goal to reduce incidents worldwide.”

If you’re excited by the prospect of the Hypersport Electric, the company is currently taking reservations for the HS model, with spots costing just $100. There are still a few Premier options available for reservation too, but those are going fast. Delivery of the HS will start in 2021.