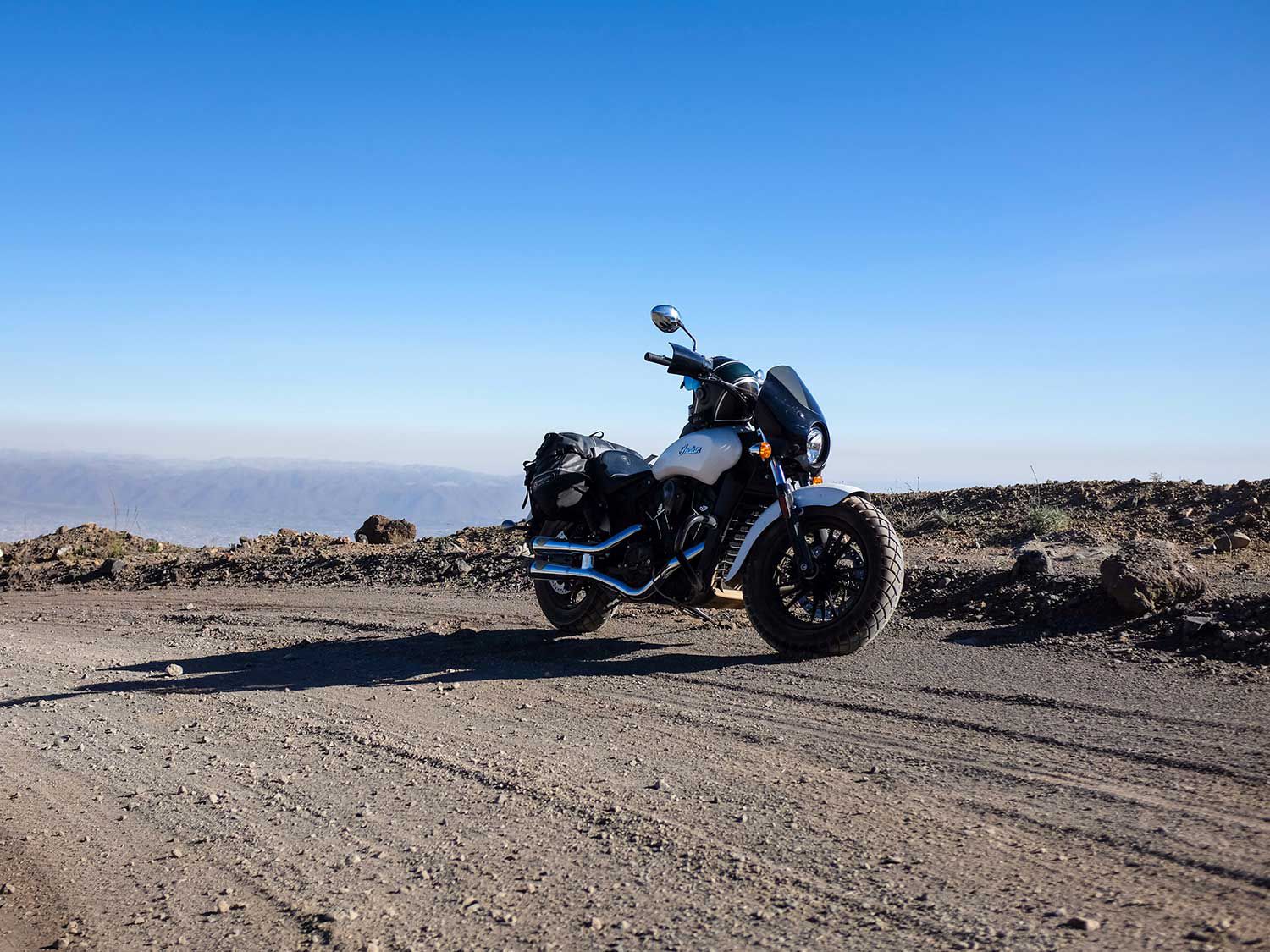 “Move and the way will open,” I told myself, as I sat on my bike behind a rubble-strewn road, closed off by a massive landslide. The only way that opened to me, however devastatingly, was to go back the direction I came. Moments like these sometimes left me feeling arrogant, as though I could just show up in such a rugged country as Peru on a Scout Sixty and not face challenges. And perhaps this is true. I suppose the Zen proverb had some merit, in that through movement and with some local advice, I did eventually find a way to the other side and was humbled by the adventure.

Related: Adventure Riding An Indian Scout Sixty In The Jungles Of Peru 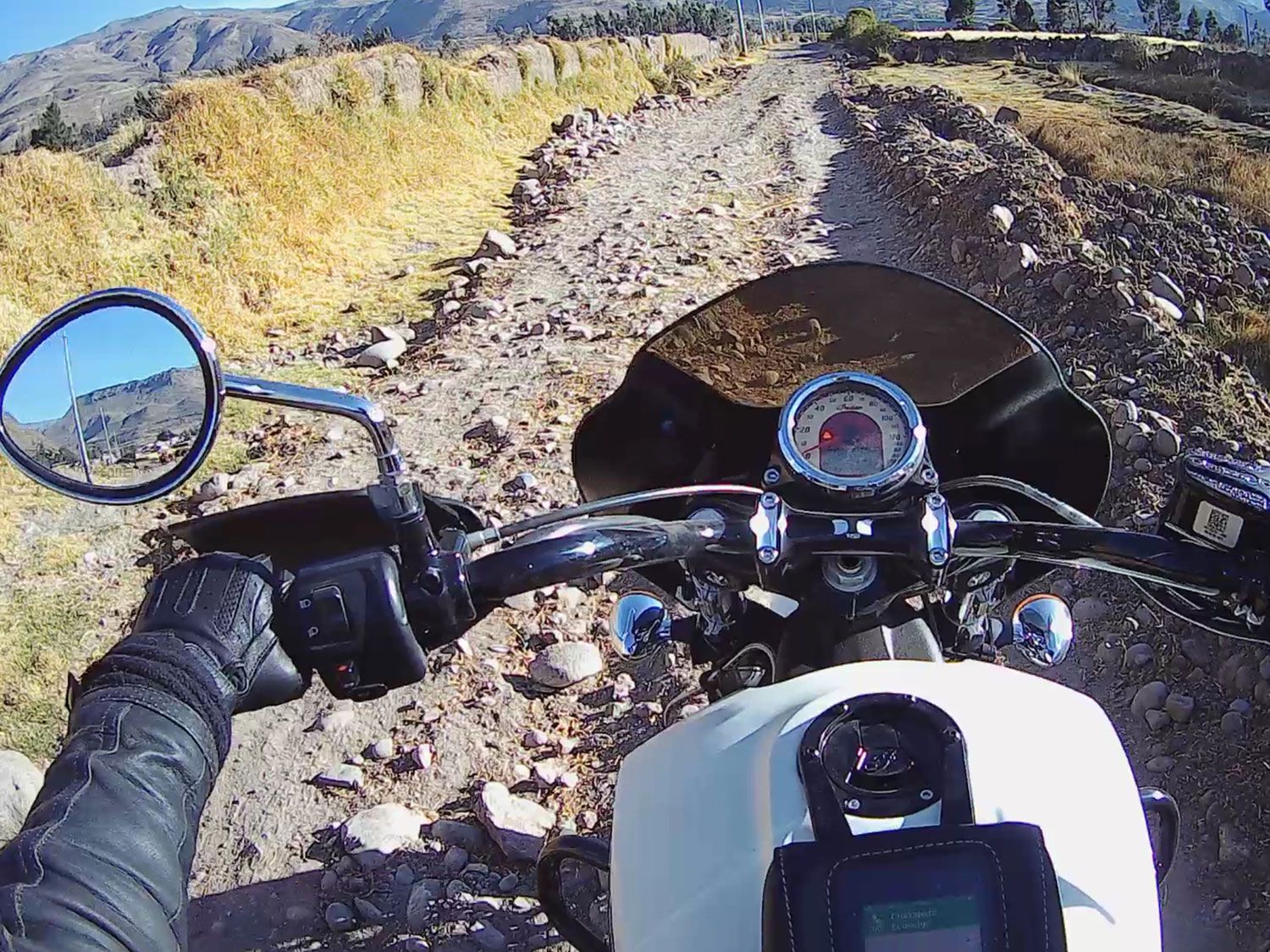 You end up on roads like this even when you intend to stay on pavement while in the mountains of Peru. (Janelle Kaz/)

Motorcycling Peru is awe-inspiring for its immense mountains, and the roads which drape across them. Active volcanoes dot the landscape, with their impressive stature and unforeseen destruction. The edge of the road drops off into a deep abyss, a riverine canyon that seems to echo the songs of the country. You’ll regularly find yourself cresting mountains above 4,000 meters, often nearing 5,000 meters, such as on the Carretera al Colca, situated at 4,910 meters (16,108 feet). This stretch of the road is nearly 3 miles above sea level and therefore one of the highest elevated passes in the world.

Peru and Bolivia infamously have the worst roads in South America, based on the dangerousness of the roads and of other drivers. Away from the Pan-American Highway, into the mountains of Peru, you’ll find your heart’s content of nerve-wracking, extremely narrow roads with steep drops, broken-off edges, crazy drivers, and, of course, landslides. 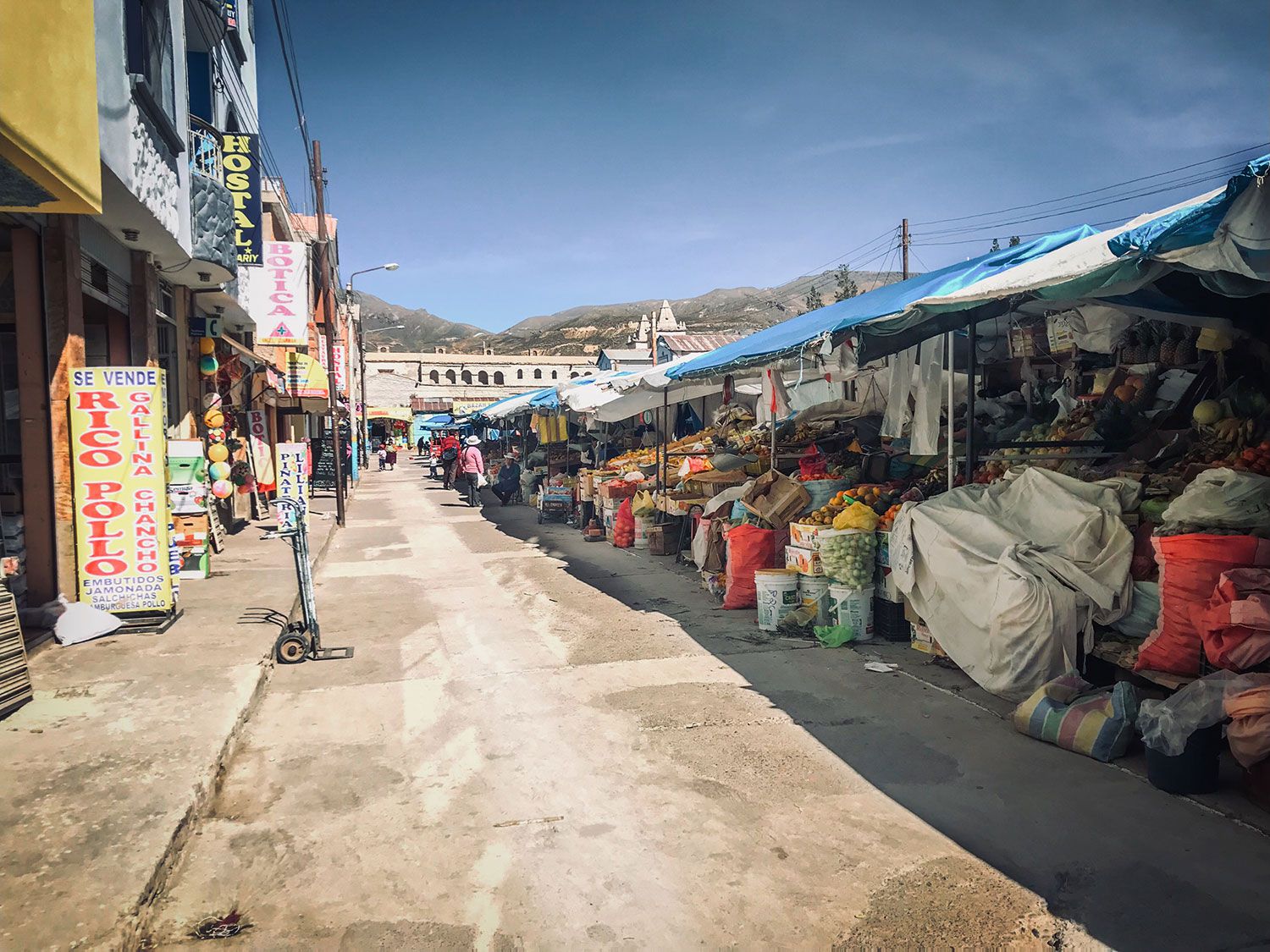 It is astonishing how Peruvians cut corners, driving into your lane around blind corners or even when they clearly see you. This was something I thought about a great deal while on the road because it is not an aspect of laziness; Peruvians are very hardworking people. I often wondered if paint on the road is simply a newer concept, and without enforcement, one that is collectively ignored. Peruvian drivers themselves complain of the extremely unsafe driving they see regularly on the roads. 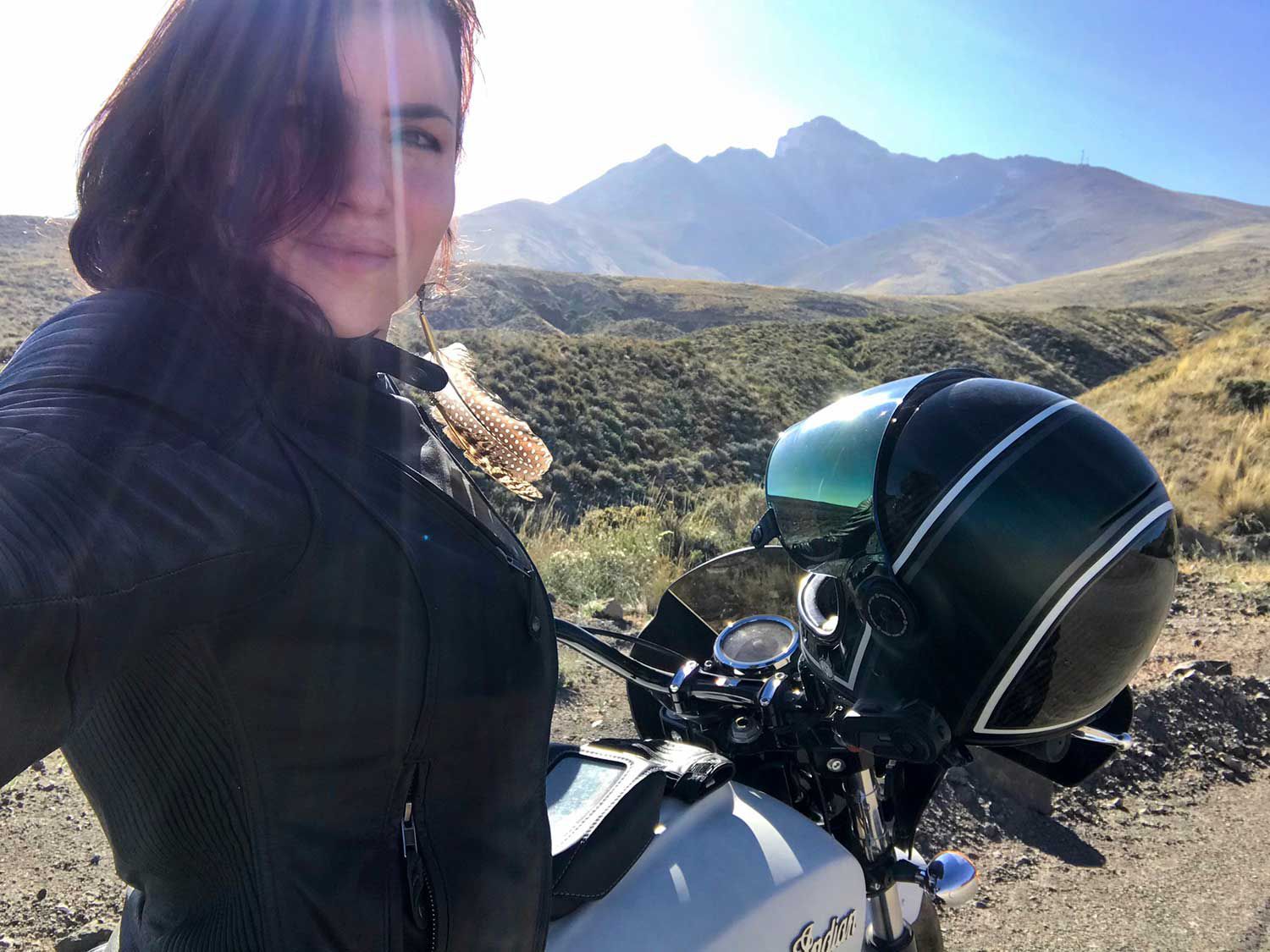 Author and her Indian Scout Sixty in the bright equatorial sun of the high Andes. (Janelle Kaz/)

I had my most challenging days riding along these Andean roads of Peru. I have considered that I failed to properly ask for blessings directly from the mountain spirits themselves before cresting their peaks. Or perhaps I did not show my gratitude in the appropriate way, of leaving gifts of tobacco and chewed coca leaves under small cairns at the top. The Apus, as they are known in Peru, are the mountains themselves as well as their guardian spirits. They are to be revered, lest your journey over them be exceedingly treacherous.

Related: Riding An Indian Scout Sixty In The Sacred Valley Of Peru

But then again, I am alive and healthy as I write this, so I must have pleased the Apus well enough. Blessings aside, here are a few lessons I learned while riding an Indian Scout Sixty solo through the Andes mountains of Peru. In Inca mythology, Apu was the name given to powerful mountains and their guardian spirits. (Janelle Kaz/)

Patience. Looking back, I see that those mountains taught me patience. Patience in the form of acceptance for where I am and that eventually, conditions will improve—but not yet.

Don’t trust Google Maps. For whatever reason, they work very poorly in Peru. Multiple map sources are best, cross-referencing all of them to figure out which might be the best route.

Related: Riding An Indian Scout Sixty Into The Heart Of The Incas 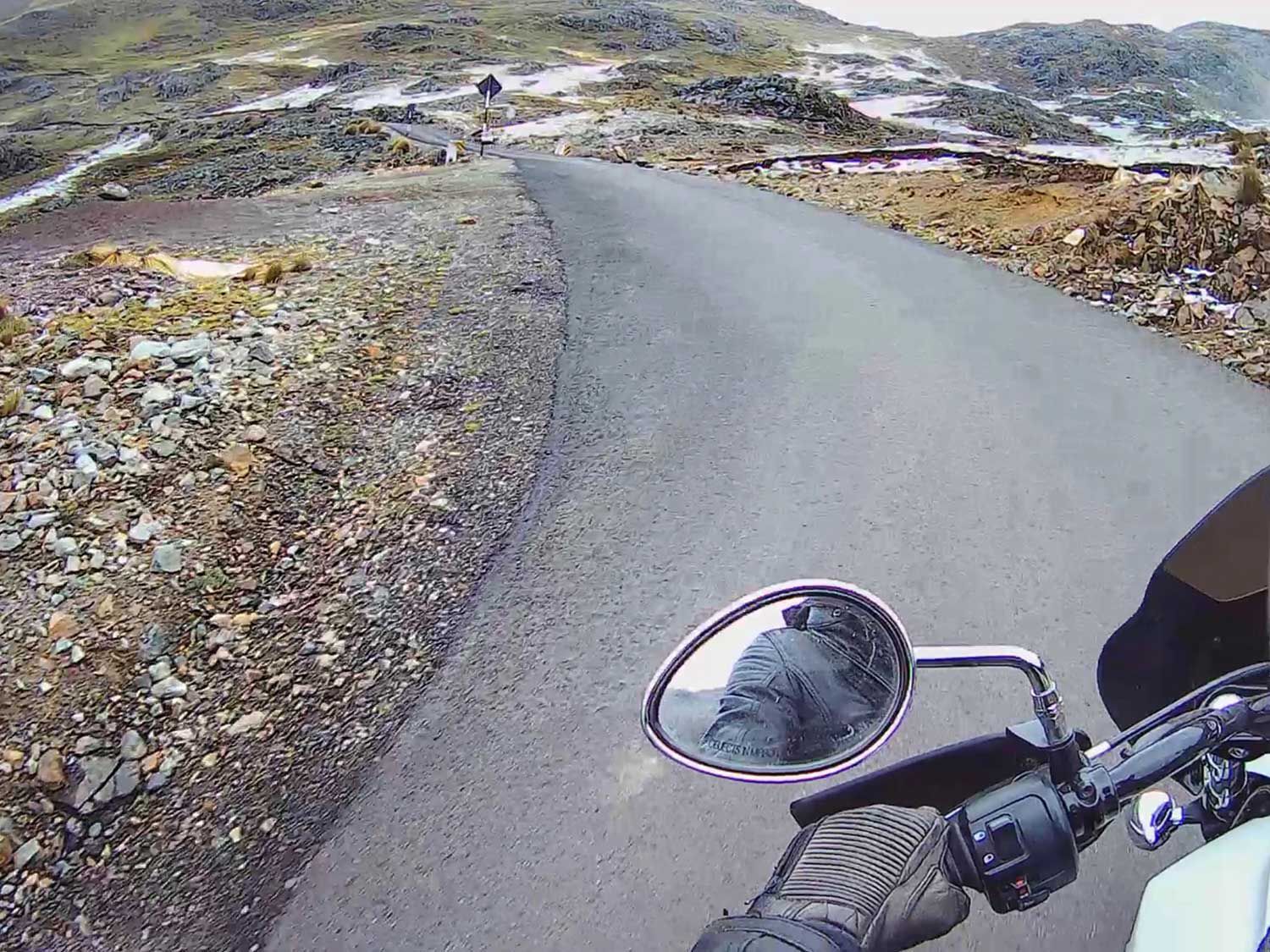 Riding amidst snow many times, over many mountains in Peru. Sena 10CPro (Janelle Kaz/)

Drink Peruvian beer—Cusqueña. I didn’t realize how good Peruvian beer was until I visited the German-settled town of Oxapampa and started drinking beer! Sadly, this town is near the north when I was nearly ready to leave the country. Yet another reason to go back…

Related: The Andes To The Amazon; An Indian Scout In Cocaine Country 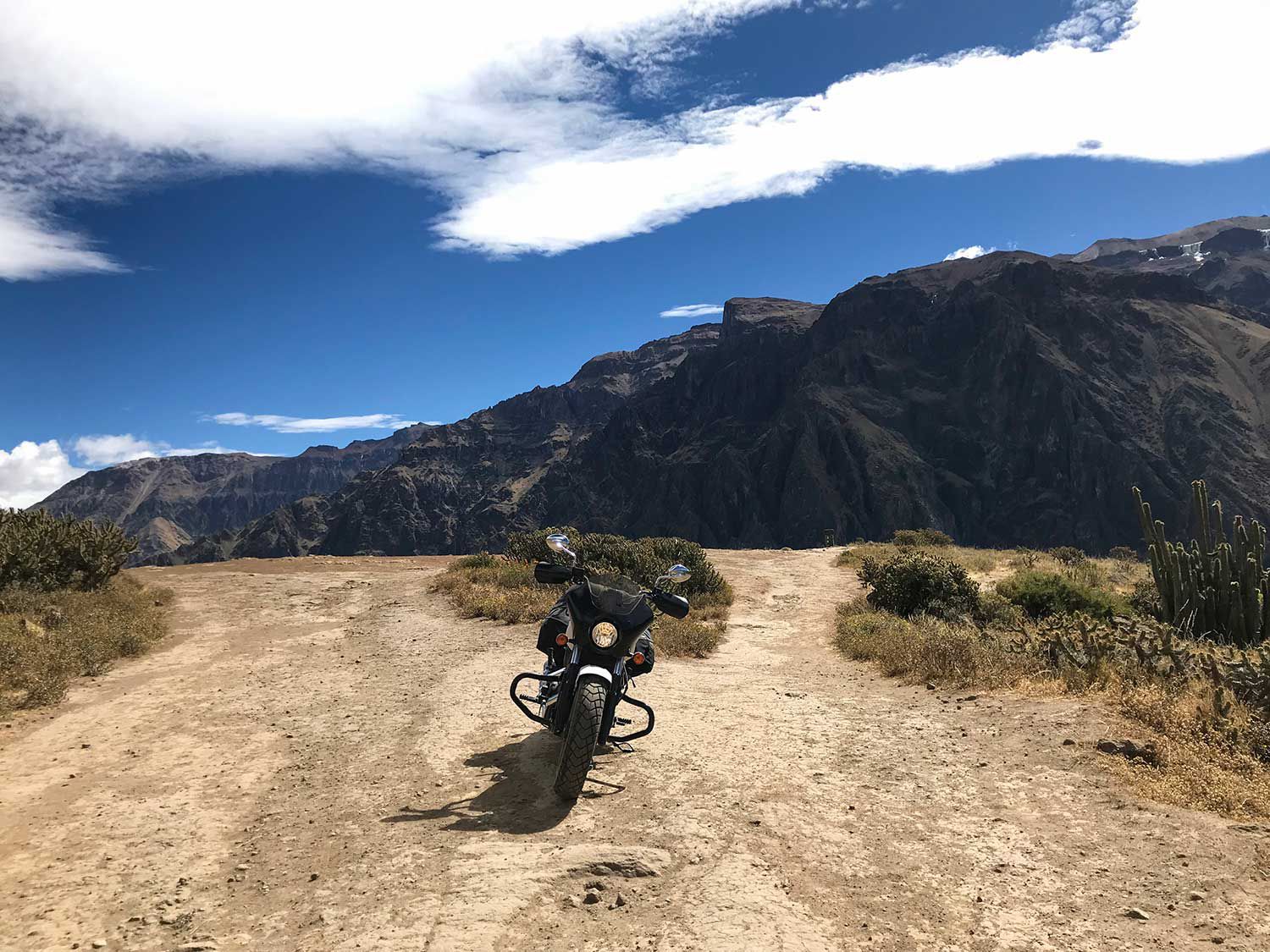 Carry dog treats. The dogs in Peru are notorious for chasing motorcyclists down. They hear my 1,000cc Indian Scout Sixty coming, with Roland Sands Design slip-ons, and simply can’t resist the chase. If you know me, you know I love dogs more than life itself. Not only do I very much not want to hit one, but I don’t want one to take me down with it on some sort of kamikaze suicide mission. Often man’s best friend would just come at me out of nowhere, exploding from the sides of the road—attacking almost directly underfoot. Other times, I’d catch them out of the periphery of my vision, running full speed at me like a cheetah. 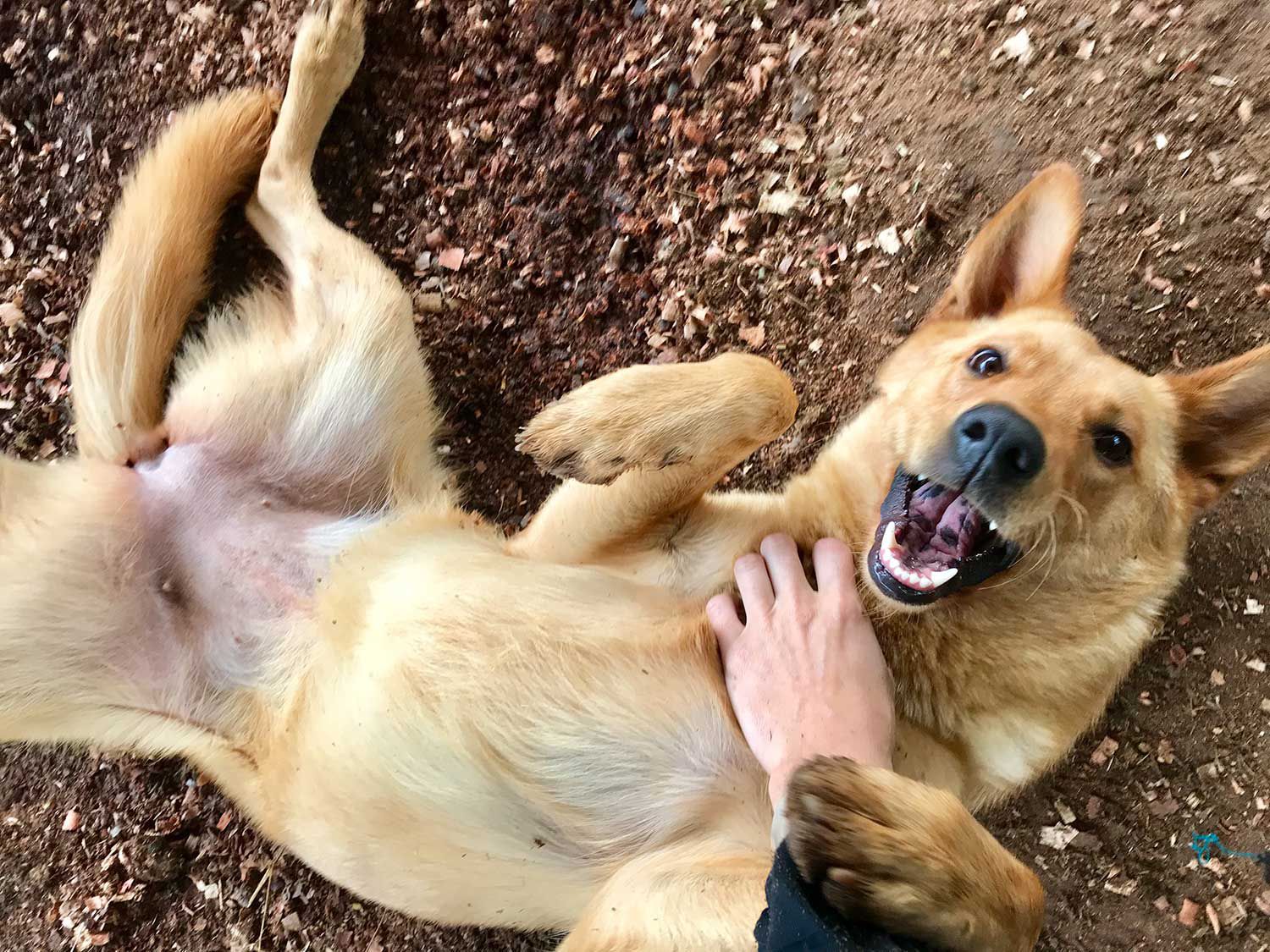 The dogs of Peru are out to get you and your bike. (Janelle Kaz/)

Adrenaline would flood my system. Once the chemical rush subsided, I would notice a tremble in my hands. Sometimes their bark is so ferocious, I would reflexively pull my knee to my chest, away from their snarled jaws. They’ve bitten before, latching onto the ankle, trying to tug my leg away from the motorcycle. Were it not for my tall boots, it could have been very problematic.

When a dog is on the chase you have two options: Speed up and holeshot past their trajectory, or come to an almost full stop and yell at them until they back down. Depending on your speed and the location of the dog, you have milliseconds to decide which is the correct option.

The jury is still out on whether the dogs see the treats as rewards for their chasing behavior, or if the treats cause them to be less hostile toward motorcyclists in general. 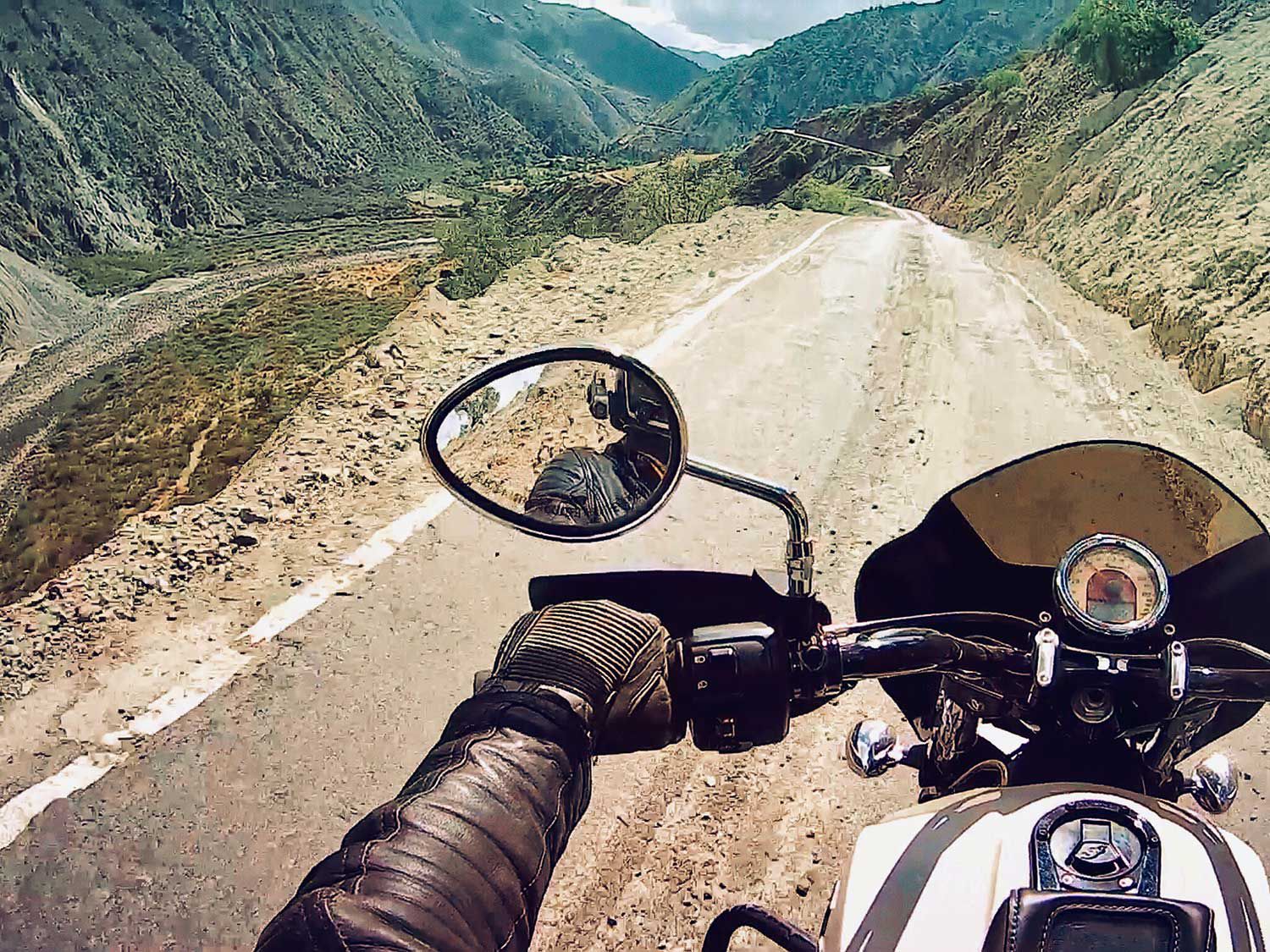 Chew coca leaves at high altitude. I wish I had known to do this when I crossed that high-elevation crossing at 4,910 meters (16,108 feet). I was already a little under the weather and ended up in bed for two days straight, not even realizing I had altitude sickness until the pain in my head remarkably cleared after 48 hours. It was National Geographic explorer, ethnobotanist, anthropologist, and author Wade Davis, a mentor of mine, who recommended that I chew the “divine leaf of immortality.”

Related: Motorcycle Touring Chile—Mountains To Sea All In A Day 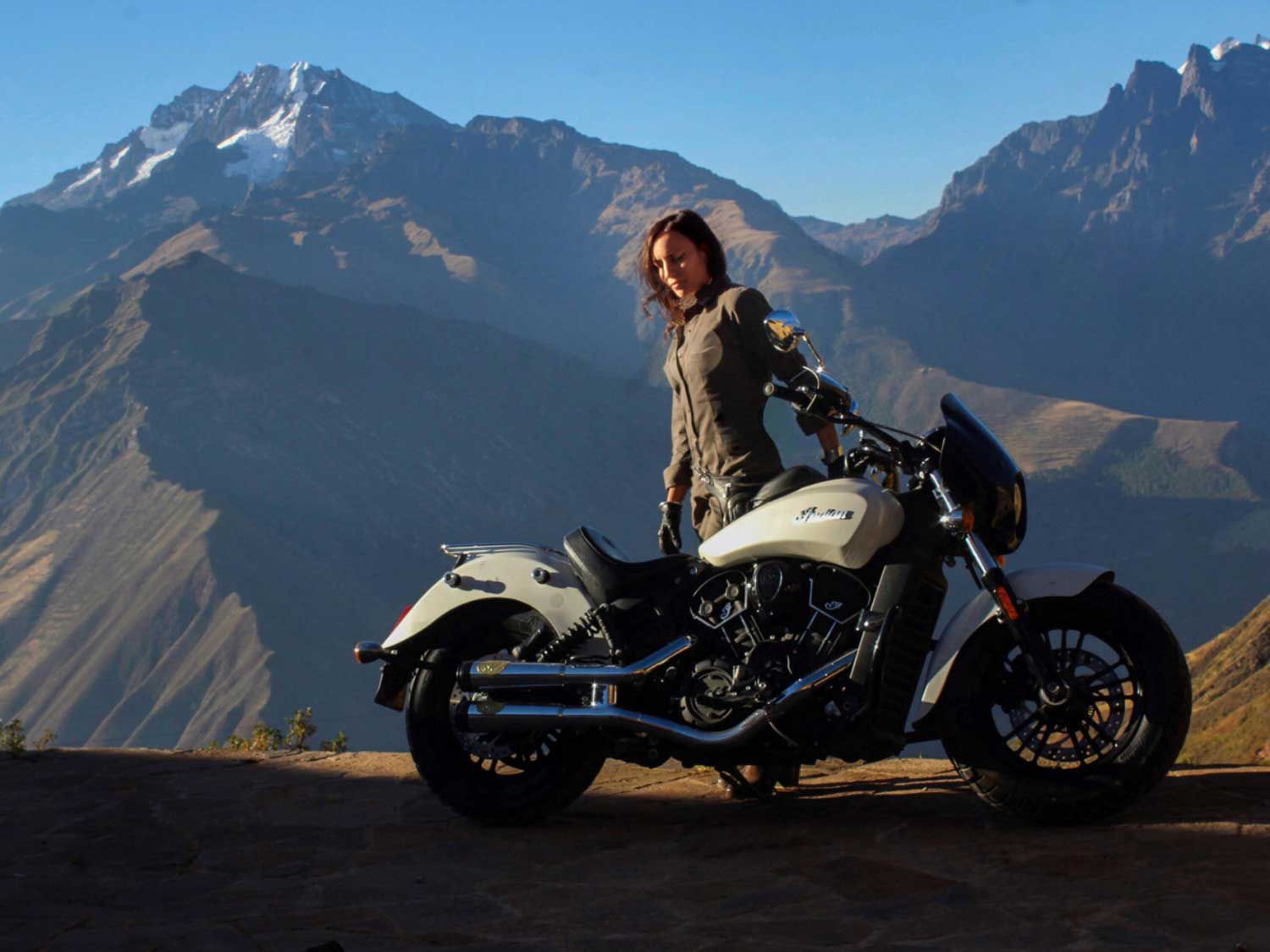 High in the mountains in the central Peruvian Andes. (Photo by Cecile VR/)

Wade Davis and his team were the first to study the nutritional components of the sacred coca plant. They discovered that, yes, coca contained a small amount of the alkaloid cocaine hydrochloride, roughly analogous to the caffeine contained in coffee beans, which is absorbed benignly through the mucous membranes of the mouth. But coca leaves are also full of vitamins, protein, enzymes which enhance the body’s ability to digest carbohydrates at high elevations, and more calcium than any other plant studied by science. It is therefore no wonder why the people of the Andes have been chewing coca for thousands of years; I should have started sooner. 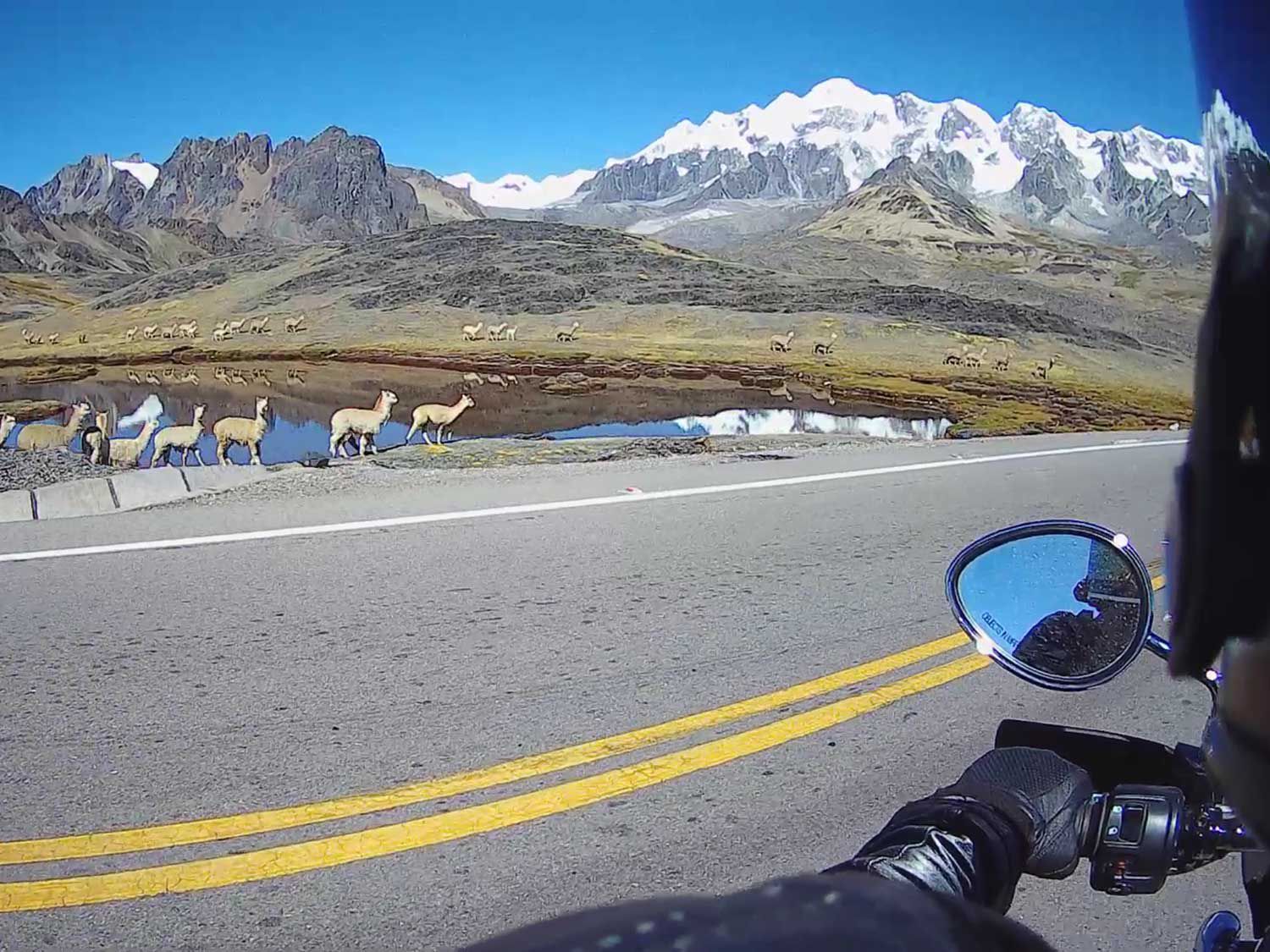 The snowcapped peaks of Mount Ausangate (6,384 meters or 20,945 feet) and herds of alpacas reflected in the mirrorlike alpine lakes of the Andes. Sena 10CPro (Janelle Kaz/)

There is no merging. Expect that van, bus, truck, or car that has pulled over to unload cargo or drop people off to not ever check if the road is clear before they pull back out into their lane. They are simply going to resume the lane when they are ready; you must anticipate this.

Be afraid of the dark. Perhaps some of the most unnerving times came while navigating the mountains at night—not something I ever intended to do nor recommend, but I had made a navigation mistake and took a wrong turn which set me back a few hours. The roads are highly inconsistent, with lethal potholes and fallen rocks that create grave obstacles. Not having daylight in rough conditions on sketchy roads with Peruvian drivers simply increases the risk of danger unnecessarily. Additionally, the nighttime chill is extremely challenging high in the mountains without the best warm-weather gear, which I woefully lack.

Related: Touring The Andes Mountains On An Indian Scout

Seek local knowledge. Aside from patience (a teaching that seems to be never-ending in my life), the biggest lesson I learned while riding in Peru is to ask multiple locals about the roads you intend to take. Riding for hours only to come upon a landslide is not an ideal situation, especially without alternative options before daylight runs out.

Related: Riding To The Cave Of Owls On Indian’s Scout Sixty 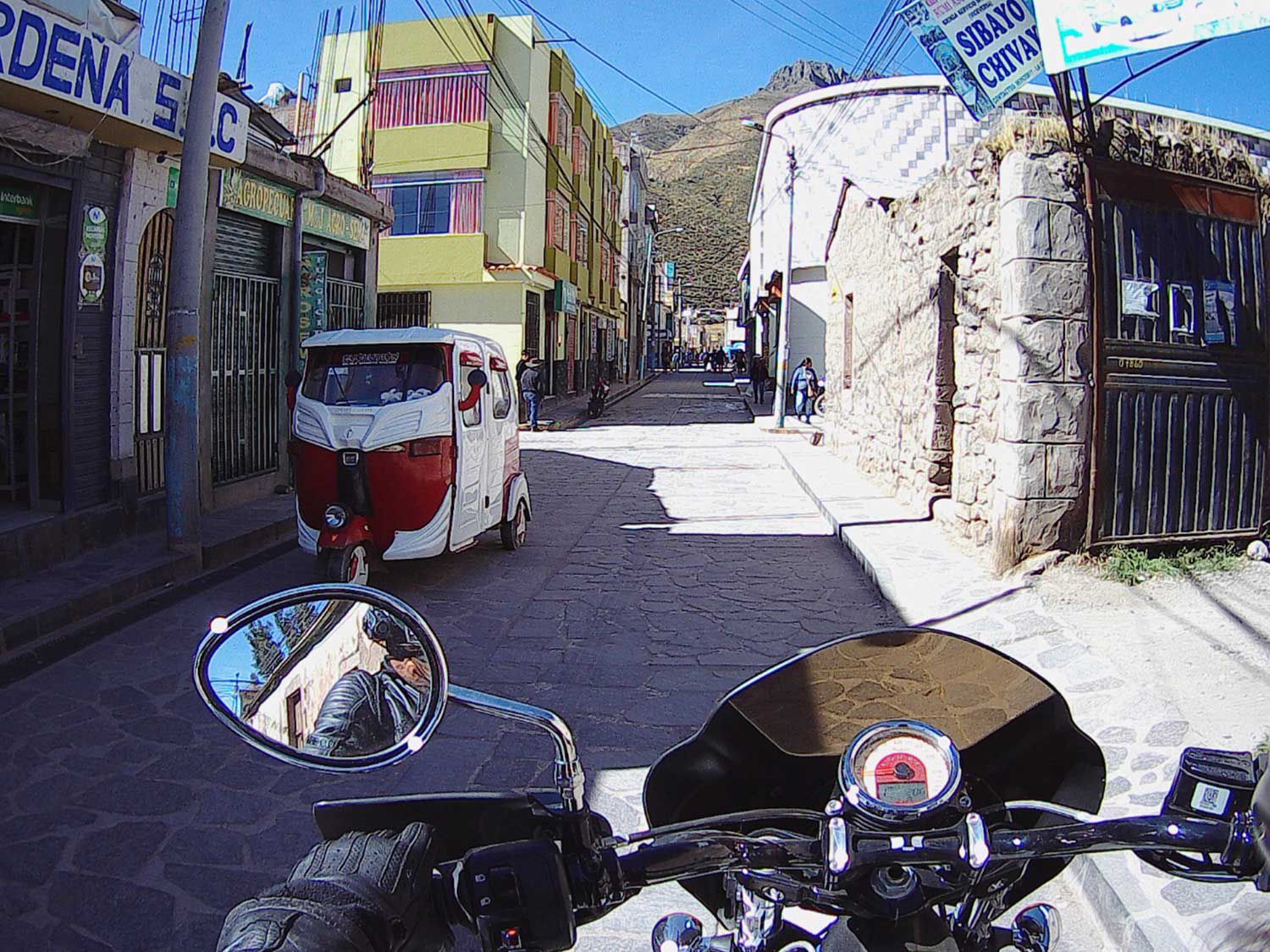 Riding through the narrow streets of a chilly mountain town. (Janelle Kaz/)

Undoubtedly, there are many unknowns, frustrations, and anxieties when embarking on a solo motorcycle journey in a country you’ve never been in. But we humans are meant to seek solutions; we thrive when we are able to solve problems and figure things out. Riding solo offers you the opportunity to practice personal accountability and know the compassion of others. With some effort and perhaps the grace of those around you, we can lift ourselves out of whatever situation we feel stuck in—whether it be a perceived roadblock or a literal one.

Related: Following Monkeys In The Clouds On An Indian Scout Sixty

Know that the mountains of Peru will humble you. Pachamama, Mother Earth goddess to the indigenous people of the Andes, is a loving but fierce force who demands our respect and humility. 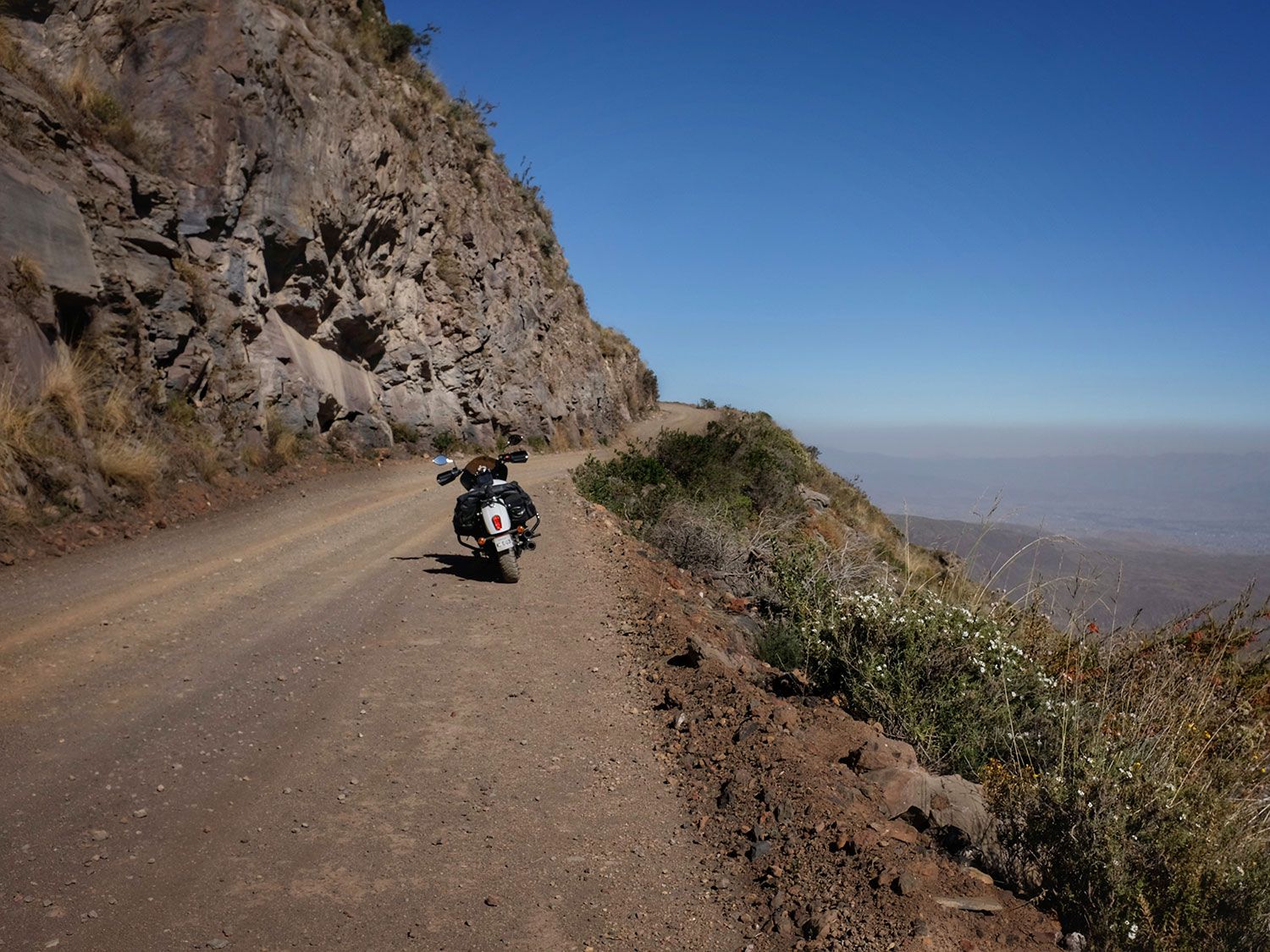 Life on the edge—riding solo and learning greater humility in Peru. (Janelle Kaz/)